2010 season kicks off this week in Sebring

After the Winter Test late last month the 2010 American Le Mans Series presented by Tequila Patron season really kicks off this week with the 58th Annual Mobil 1 Twelve Hours of Sebring Presented by Fresh From Florida at the Sebring International Raceway. Thirty-six entries are set take part in the classic race. 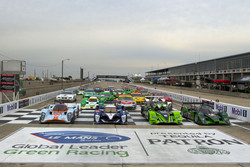 Team Peugeot Total seems to have the best cards in the LMP category this year, given the fact that the works Audi R15 TDI cars will not be racing at Sebring this year. The absence of the German manufacturer means Peugeot, which has entered two cars, will be facing four or five LMP1s and three LMP2s. During the Winter Test the quickest car on the track was the Aston Martin Racing Lola Aston Martin, but except for Intersport Racing none of the other LMP1 teams took part in the official pre season test. While Gene/Wurz/Davidson and Lamy/Bourdais/Minassian are set to battle for victory the AMR entry (Primat/Fernandez/Mucke) is not certain of taking the best of the petrol powered cars. Drayson Racing, running a Judd-powered Lola coupe, have brought in tons of experience by signing Emanuele Pirro for the enduro races to join Jonny Cocker and Paul Drayson.

The other two cars in the class are the two Lola B06/10 AER of Autocon Motorsports (Willman/Burgess/Ehret) and Intersport Racing (Field/Field), but these cars would - under normal circumstances - not be able to match the pace of the newer LMP1s. Creation Autosportif could also join the party, but at this moment their status is not yet known.

In the LMP2 class there will be a three-way battle for the class honors. Defending ALMS champion Patron Highcroft Racing (Brabham/Pagenaud/Franchitti) will try everything to beat the Muscle Milk Team CytoSport Porsche RS Spyder of Pickett/Graf/Maassen. The third car in this class is the Dyson Racing Team Lola Mazda of Dyson/Smith/Meyrick. One must say that the #1 Honda Performance Development ARX-01c is the favorite in this class.

No GT1 cars will race at Sebring, but the quality of the GT2 field means nobody will complain about this. Thirteen cars will tackle the event, with the outcome too close to call at the moment. Out of the thirteen GT2 entries six can be considered as serious contenders for the class win. The two Corvettes will be racing at Sebring for the first time in GT2, but the 2009 finale showed the Pratt&Miller-built cars are in for the win. Like in 2009 Magnussen and O'Connell will be joined by Antonio Garcia in the #3 car, while Beretta and Gavin will be joined by none other than former Porsche works driver Emmanuel Collard, an absolute sportscar ace.

Flying Lizard Motorsports Jorg Bergmeister and Pat Long are joined by another quick Porsche works driver, Marc Lieb. These three drivers will form the best Porsche lineup present at Sebring and will try to win the race for the people in Weissach. But they will face the Risi Competizione Ferrari F430 GT of Jaime Melo, Gianmaria Bruni and Pierre Kaffer in the race as well, a confrontation that ended in tears for the Porsche squad on more than one occasion.

The two BMW Rahal Letterman Racing Team BMW E92 M3 will also be chasing a victory in Florida. Compared to 2009 the line-ups in the two BMW cars have been changed, Muller and Hand will be joined by Priaulx in the #90, while Auberlen and Milner will be joined by Dirk Werner in the #92. Both Porsche and Ferrari have outsiders in case the six cars mentioned above hit trouble. Team Falken Tire has been given Porsche works support in the form of Wolf Henzler and Patrick Pilet joining Bryan Sellers in the #17 car, while Richard Lietz will strenghten the #44 Lizards Porsche line-up of Law/Neiman.

Possible outsiders in a Ferrari are the remaining three F430 GTs . Extreme Speed Motorsports' Scott Sharp (defending ALMS champion) and Johannes van Overbeek (former Lizards driver) will be joined by experienced young German Dominik Farnbacher, while Rolex Daytona 24 Hours winner Joao Barbosa will be added to the team's second F430. He joins Guy Cosmo and Ed Brown. A solid performance by the #61 Krohn Racing-Risi Competizione Ferrari could lead to a podium finish for Krohn, Jonsson and Van der Poele. The trio has shown it before at the Le Mans 24 Hours.

Also competing in GT2 but unlikely to go for victory are the Robertson Racing Ford GT (Robertson/Robertson/Murry) and the JaguarRSR entry for Gentilozzi/Goossens/Dalziel. The Jaguar is only at the starting point of its development and should not be expected to race for a top position in GT2. New additions to the Sebring grid are the LMPC and GTC cars. Six Oreca-Courage FLM09 cars and seven Porsche 911 GT3 Cup cars will be on the grid and several rather familiar names will be driving these cars.

In LMPC Primetime Race Group will enter one FLM09 after dropping the Dodge Viper GT2 car. Joel Feinberg and Kyle Marcelli will be racing the car. Genoa Racing went for experience and youth by signing Andy Wallace and JR Hildebrand to partner Tom Sutherland in the #36 car. Another experienced driver will be racing the Level 5 Motorsports entry, namely Christophe Bouchut. He will join Scott Tucker and Mark Wilkins. Tucker will also join Ryan Hunter-Reay and James Gue in the team's second car. Gunnar Jeanette and Elton Julian will bring sportscar experience to Green Earth Team Gunnar (joining Christian Zugel), while Intersport will also enter a car for Mitch Pagery, Brian Wong and David Ducote.

All in all we have thirty-six cars on the list that should be able to make the 58th running of the Sebring 12 Hours a great success.

Editor's note: Our thanks to www.planetlemans.com's Marcel ten Caat for allowing the use of his preview for the 58th Annual Mobil 1 Twelve Hours of Sebring.