Pumpelly drove two Porsches for BGB Motorsports in 2013: the No. 38 Porsche Carrera in the Continental Tire Sports Car Challenge GS category and the No. 38 Porsche Cayman in the new Rolex Sports Car Series GX category. Partnering with Dr. Jim Norman in both cars, Pumpelly scored GX wins at Circuit of the Americas and Barber Motorsports Park, and a thrilling GS win at Mazda Raceway Laguna Seca. 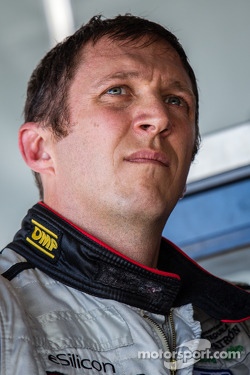 “I was incredibly lucky to race with BGB Motorsports in both the Rolex GT and Continental Tire Series,” Pumpelly said. “Dr. Jim Norman, Jon Tecce and the team are all very passionate about Porsches. They never back down from a challenge and will turn a car inside out to fix a problem. I’m glad we were able to get Dr. Jim the GX Drivers’ Championship and a Team Championship for BGB. Those guys earned every bit of it.”

This season was the last for the Rolex Sports Car Series, which will merge with the ALMS in 2014 to become the Tudor United SportsCar Championship. Pumpelly closes his Rolex career with eight race wins, three poles and 26 podium finishes.

In his first season with Flying Lizard Motorsports in the ALMS GTC category, Pumpelly collected six podiums with co-driver Nelson Canache Jr., including race wins at Lime Rock Park, Road America and Petit Le Mans. In each of those events Pumpelly qualified the No. 45 Porsche 911 GT3 Cup on the pole, giving him three fast qualifiers for the year. The season ended with the ALMS GTC Team Championship in the hands of Flying Lizard Motorsports.

“This was an incredible year in ALMS with Flying Lizard,” Pumpelly said. “The car was impeccably prepared all year and my co-driver Nelson Canche Jr. was at the top of his game every time he got into the car. Flying Lizard Motorsports are the utmost professionals in everything they do, their reputation really proceeds them in sports cars, and they are more than deserving of this team championship in their first season in GTC.”

At the close of the final ALMS season, Pumpelly’s career stats include seven wins, 18 podium appearances and five pole positions. He will go down in the series record books as holding the fastest GTC qualifying time at Road America and scoring more fast race laps in GTC than any other driver (11), including GTC race lap records at Long Beach, Mid-Ohio, VIRginia International Raceway and Road Atlanta.

“This was a big year for me; 31 races in three different series and it paid off with the most race wins I’ve ever had in a single season,” Pumpelly said. “It was also my first season as a dad, so I need to thank my wife Lindsay first and foremost for putting up with such a hectic schedule, not to mention my family and friends who helped us out along the way. I also owe a big debt of gratitude to Jim Norman, John Tecce, and everyone at BGB Motorsports as well as Seth Neiman and Flying Lizard for giving me incredible opportunities to do what I love. It was an honor to be part of championships for two great organizations.

“The merger of ALMS and GRAND-AM will bring all the best sports car talent under one roof next year. I’m looking forward to that level of competition and to winning more races.”

Pumpelly will embark on an “off-season” of testing as both the Tudor United SportsCar Championship and Continental Tire Sports Car Challenge will hold official test sessions at Sebring International Raceway and Daytona International Raceway in the coming winter months. Stay tuned for news on Pumpelly’s 2014 plans.

Apexed: Safety in a dangerous world

Ollie Millroy will return to the Asian Le Mans Series this season with the same Team AAI squad for whom he helped secure the 2014 GT Teams’ and Drivers’ titles.

The motorsports world suffered many losses this season, and are remembered in this top moment story by Motorsport.com.