Coming off of a disappointing finish at Mosport just eight days ago, the team is anxious to get back to the podium. A fuel pick-up problem at Mosport, slowed the No. 23, taking the team off of the podium in the waining laps.

Sweedler is rejoined by Leh Keen for this weekend's race. The last time the duo was paired was at Long Beach resulting in a second place finish. Keen brings speed to the team, having piloted an AJR Porsche to the last two Mobil 1 Twelve Hours of Sebring race GTC pole positions. Sweedler likes the 2.2-mile, 13-turn track located an hour north of Columbus. 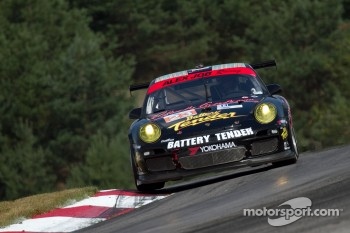 "Mid-Ohio is one of my favorite tracks to run," Sweedler said. "It has characteristics of many tracks and is probably the most technical on our schedule. I always look forward to racing there and am excited that Leh Keen will be re-joining AJR as my teammate. Since Leh and I have lots of time at Mid-Ohio, we will be able to get right to the task of working with Greg (Fordahl, engineer) and the entire team at Alex Job Racing to insure we have a top performance for the Battery Tender/Robert Graham No. 23 Porsche."

Leh Keen has experienced both victories and challenges at Mid-Ohio and is ready to get his third win at the Lexington, Ohio circuit.

"In 2008 I won in the Rolex GT race in the rain at Mid-Ohio, it was a great run," Keen said. "I also won there in 2009, but in 2007 I had a huge crash there as well. That ended my season for that year. So it's a special place for me with highs and lows. I do love to drive the track. It is a great circuit with technical turns and elevation changes Mid-Ohio is a very interesting track to drive. It's important to get the car nimble to squirt through all the up and down tight corners on the backside. It's very demanding with a flow of corners starting at the end of the back straight, rights and lefts over sharp hills. I look forward to working with Greg (Fordahl, engineer) and squeezing every bit of potential out of our Battery Tender/AJR Porsche GT3 Cup."

Alex Job, team owner, has a tough history at Mid-Ohio with just one win in 2005.

"I am not sure what it is about that track, but our win rate there is low compared to everywhere else we race," Job said. "However, we are going into the weekend planning to win. Both Bill and Leh like the track and have a lot of miles around there on their resumes. It is good to have Leh back, he brings a lot of speed and one more win than the team has at Mid-Ohio. Bill has really picked up his game this year. He has been fast and very consistent for us. We are looking to get our win rate up at Mid-Ohio this weekend."