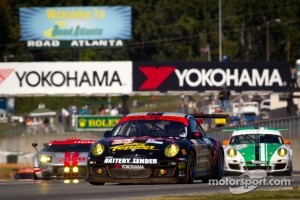 Starting from the second row, Leh Keen, Charleston, South Carolina, wasted little time in driving the No. 23 Battery Tender/William Rast/Robert Graham/Alex Job Racing Porsche to the front of the GTC field. On his first pit stop on lap 22 for fuel under caution, he was exiting the pits and didn't see the red light at the end of pit road and proceeded onto the track. The result was a pit lane violation and a 60-second penalty that put the team down a lap. With some strong driving by Keen, and crafty strategy from the team, Keen was back on the lead lap by circuit 54. The team continued to swap the top three positions throughout the day and night as pit stops cycled. Brian Wong, Newport Beach, California did a long mid-day stint to keep the team at the front of the field. Bill Sweedler, Westport, Connecticut drew the late-afternoon shift and drove a flawless double stint to keep the Battery Tender Porsche in contention.

As night fell, along with the track temperatures, a well-rested Keen took over the car and proceeded to rage to the front. He quickly passed for second and engaged in a battle for the top step of the podium with the pole sitting No. 54 car. Chipping away at the lead, the GTC race came down to a pit stop competition on lap 356 (of 394 total) between the 54 and AJR teams. The AJR crew was able to get Keen out ahead of the 54 car with a ten-second gap. But the lead only lasted for a lap, when on the very next circuit Keen was pushed off the track in Turn One by a GT Class Ferrari, causing damage to the front splitter severely affecting the handling in the high-speed turns. That made Keen easy prey for the fast 54 car, which went by ten laps later relegating the team to the second step of the podium.

"It was a great start," Keen said. "Qualifying was really close yesterday, we ended up fourth, but time wise we were right there. The car was great all day. We had a very good race set-up. I was able to have a great stint and go right to the front. I pitted and was going down the pit lane following a Ferrari. He exited and I followed him, and I guess the red light was on and we had to come in under green for a penalty. It took us about two-and-half-hours to get back up to the lead. The team made all of the right calls to make up the lap. Bill and Brian had great middle race stints to keep us upfront. The guys had an awesome stop at the end. The AJR guys are the best in pit lane for sure. The car was fast. I came in and got tires and fuel, following the 54. Our guys did a great stop and we beat them out. I was running good, then on the next lap I was going into Turn One and one of the GT Ferrari's did a dive-bomb move on the inside and pushed me wide off of the track. I went off the track and almost went into the wall. It was so wild all day. We had been lucky all day to stay clean. It was a tough break when we were leading the race. This is the one that got away. I want to thank Battery Tender and the team. We had the car to win. Second place is not all bad."

Wong did a strong double stint and led laps.

"My stint was good," Wong said. "We got out front and led a lot of laps. Leh got us off to a great start. My run was a good long one in the middle. We were a little off sequence with our pit stops, so we were up and down the leader board all day. We weren't really worried. We have the best team on pit road. It was really unfortunate what happened in the end. We had everything going great with a strong start by Leh and Bill had a nice long stint in the middle. I had a lot of fun all week. I have Battery Tender and Alex Job to thank for that. In the end, we did everything right, and when it is not your day, it isn't your day."

Sweedler also had a double stint and didn't want to get out of the car.

"During my first stint I had a few prototypes trying to push me off," Sweedler said. "In my second run I settled in and had a lot of fun. I didn't want to get out. I was able to keep us right up in the hunt at the front. We had the race was set-up for a win. Leh was winning and then he got shoved tearing the front splitter off. Running here without a splitter is next to impossible, but he did an amazing job to bring the car home in second. He was still running very competitive times, but couldn't hold off the 54 car. We really wanted to give the team a win here today, but we will take second and look forward to next year."

Alex Job, team owner, had all of the pieces in place for the final run to the checker.

"Our race played out just like we planned," Job said. "Bill, Brian and Leh did a great job behind the wheel. There was a lot of craziness going on with the faster cars trying to push us around, but the guys kept their composure and didn't put a wheel wrong all day. The crew did an absolute great job with the pit stops. The stops were flawless and in the end put us in a position to win. Just when we were in the front with less than an hour to go our fate was decided by a bully in the GT class making a bad move into Turn One. That really affected the handling the car for Leh, but he did a great job to keep us in second place. Bill and Brian both had great stints and led laps today. We wanted the win, but closed out the season on a high-note in second."

The American Le Mans Series Presented by Tequila Patron will take up action in 2012 with the 60th running of the Mobil One Twelve Hours of Sebring, March 17th.