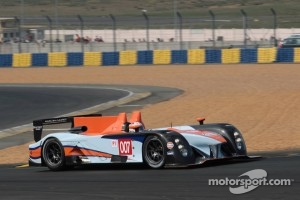 Gaydon 14 September 2011. Aston Martin Racing will be back on US soil to compete in their first American Le Mans Series (ALMS) race of the year at Laguna Seca on 17 and 18 September.

The team will be making the trans-Atlantic trip from Silverstone, UK where they competed in the fifth round of the Intercontinental Le Mans Cup race only the weekend before.

Returning to the Mazda Raceway, factory drivers Adrian Fernandez (MX), Stefan Mücke (D) and Harold Primat (CH) will be piloting the Lowes sponsored DBR1-2 on the famous circuit featuring one of the most challenging corners of the American Le Mans Series: The Corkscrew. The six hour race which starts in daylight and ends in darkness will push the drivers to the limit as the sun sets over Monterey.

The familiar blue and orange Gulf Oil liveried factory DBR1-2 will be joined by official partner team Muscle Milk who are currently second in the championship only 24 points behind the leading team. The Muscle Milk Aston Martin LMP1 will be driven by Lucas Luhr (D) and Klaus Graf (D).

Aston Martin Racing Team Principal, George Howard-Chappell said: “I am delighted to be returning to the U.S. to compete in the final rounds of the ALMS. We have had considerable success there in the past, and we’ll be aiming to put in a strong performance in front of our US fans and sponsors.

“Laguna Seca is not necessarily ideal for a LMP1 car, owing to its tight and twisting corners, but we will be making setup changes during free practice to find the optimum balance for the circuit.”

Adrian Fernandez who will be racing in front of his home crowd in the 007 car said: “I am really looking forward to racing in the U.S. again and seeing a lot of friends and fans in the ALMS paddock. Laguna Seca is one of my favorite tracks. We will have some tough competition on the grid with the other teams having had many races under their belt, but I am confident we can deliver a good result. The fans love the sound of the V12, and we look forward to putting on a good show.”

Smith's No. 78 Chevrolet pays tribute to victims of Aurora tragedy

Smith's No. 78 Chevrolet pays tribute to victims of Aurora tragedy