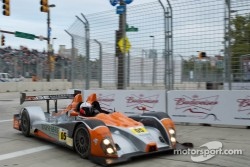 After starting on the LMPC pole position, the sister #06 Excel Consultants / Composite Resources machine, driven by Ricardo Gonzalez and Gunnar Jeannette, was plagued by an ongoing electronics malfunction but managed to eke out a fourth-place LMPC finish (seventh overall).

The two-hour event began with Ricardo Gonzalez starting in the #06 up front and Jon Bennett in the #05 in fifth spot, behind a number of GT cars. Gonzalez immediately pulled out to a considerable lead over other LMPC contenders until a mere 22 minutes into the event the car began experiencing electronics issues, causing it to crawl around the track. The #06 was able to be re-fired and rejoined the race in sixth spot, 18th overall.

A yellow flag brought out by a loose manhole cover allowed the CORE autosport team to strengthen its position. Bennett stayed strong, picking his way through GT traffic and handed a solid fifth place car to Montecalvo. Using clever pit strategy, the team was able to get a lap back for the #06 car and Gonzalez turned the car over to Jeannette.