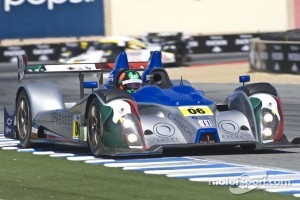 These solid results from the first-year team was not enough to hold onto the lead for the ALMS LMPC driver and team championships, a place they’ve held since the beginning of the season. With one race left in the 2011 season, CORE autosport drivers are three points behind race winner Eric Lux and the team is two points behind Lux’ Genoa racing team.

The ModSpace American Le Mans Monterey presented by Tequila Patrón eventat Mazda Raceway Laguna Seca began with young Montecalvo behind the wheel of the #05 in fourth on the grid and Gonzalez in the #06 in second. By the time the field circulated the 11-turn, 2.238-mile circuit, Gonzalez was in the lead, which he was able to maintain until the end of his nearly two-hour stint. Montecalvo worked the #05 up to second spot prior to turning the car over to team owner Jon Bennett.

Taking over from Gonzalez, Junco held onto the lead until the 2 hour and 45 minute mark, when #89 Kyle Marcelli took the first spot. For the remaining hour and fifteen minute stint for Junco he rallied from a low of fifth spot to bring the car in third to turn over to Gunnar Jeannette. The #05 with Bennett ran strongly, but got caught in traffic and he handed the car over to former Le Mans 24 Hour champion Andy Wallace in fourth position, which due to a series of accidents and caution periods, would be where Wallace finished out the race.

Once behind the wheel of the #06, Jeannette immediately worked his way to second spot behind the #63 Genoa car driven by former teammate Elton Julian, and then began a battle between the two for first place that lasted until there were only 28 minutes to go. It was at that point when Jeannette elected to pit for fuel and rear tires, thinking that he could make up the time between he and the Genoa car, which also had to stop for fuel if the race were to remain green.

Unfortunately for CORE autosport there was a yellow flag with a mere 16 minutes remaining and the Genoa team, made up of Eric Lux, Elton Julian and Michael Guasch was able to make it to the end of the race without stopping for fuel. Jeannette tried to make up the time between the two entries and fought traffic but his efforts were denied by a mere 0.329 seconds.

The final race of the 2011 season is the American Le Mans Series finale, the Petit Le Mans Powered by Mazda, on Saturday October 1. The ten hour or 1000-mile event held at Road Atlanta pays more points than almost any other race during the season, so the CORE autosport team still has a solid chance to take dual 2011 championships.