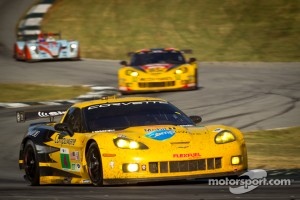 BRASELTON, Ga., Oct. 1, 2011 – After nine hours and 35 minutes of intense competition, Corvette Racing finished fourth in the GT class in Petit Le Mans, the season finale of the American Le Mans Series. The No. 4 Compuware Corvette C6.R driven by Oliver Gavin, Jan Magnussen, and Richard Westbrook completed 366 laps around the 2.54-mile Road Atlanta circuit en route to its fourth-place finish. The No. 3 Compuware Corvette C6.R of Olivier Beretta, Tommy Milner, and Antonio Garcia retired after 76 laps with a broken gearbox and finished 17th in the GT category. The No. 51 AF Corse Ferrari won the GT division by a 6.685-second margin of victory.

With a hint of autumn in the air, the ninth round of the ALMS championship produced the hard-fought racing that has been the hallmark of the GT class in 2011. Magnussen started the No. 4 Corvette C6.R seventh on the GT grid after the withdrawal of the No. 062 Ferrari. He was sixth after one lap, dropped to seventh on the third lap, and was fourth after the first full-course caution. The Dane made his first stop for fuel and tires at 57 minutes, but incurred a stop-and-go penalty for a pit lane infraction. Magnussen then ran his second stint to 80 laps and pitted at 2:11, handing off the car to Oliver Gavin.

"There was a lot of stuff going on at the start and traffic was crazy," Magnussen said. "I had a big moment at the beginning of the race – I hit a curb, bounced all over the place, and thought I was going to fall off. You've got to be so alert all the time; if it's not somebody in front of you, it's somebody behind you."

Gavin drove to the four-hour mark and then was replaced by Richard Westbrook.

"It was mayhem on every lap," said Gavin. "It was just insanity, people driving all over the track, sideways, on and off the grass. I have to say the traffic was by far the worst I've seen. Fifty-three cars on this track is just too many."

Third driver Richard Westbrook did his first stint in the Corvette C6.R since the 24 Hours of Le Mans, taking the No. 4 to P2 before pitting at 5:02 and giving the car to Magnussen.

"It's really good to be back in the Corvette," Westbrook remarked. "Conditions weren't ideal for our car, but in clean air it was great. Our competition seemed to have a bit of an advantage on the straight, and hopefully that will be addressed."

Magnussen drove a double stint, and as the GT frontrunners cycled through pit stops and two caution periods, Magnussen kept the No. 4 Corvette in contention. He pitted under caution at 7:20, and Gavin took over for the run to the checkered flag as darkness descended. Unfortunately the pit stop cycle and pass-around put the Corvette a lap down to the leaders. When two cars ahead of him pitted, Gavin was promoted to fourth, and he defended that position in the closing laps against Wolf Henzler's Porsche.

"There was one big incident when a prototype's engine blew up and a number of cars spun on that oil," Gavin recalled. "There were cars going everywhere, and I was nearly one of them, but I managed to get through. At one point Wolf was catching me quickly, but I stretched it out a bit, then we got a caution and that gave us the lead we needed. Fourth place was about all we could have really hoped for today."

That finish earned enough points to secure second place in the GT drivers championship for Gavin and Magnussen.

"It's been a really, really tough year with strong competition from BMW, Porsche and Ferrari," Magnussen said. "I think we've learned a lot, and we'll bring that forward to next year. We'll come back stronger and try to win the championship. We've had some hard races and we've had some bad luck, but all in all we got the best out of this season that we could."

The No. 3 Corvette C6.R encountered mechanical misfortune at Petit Le Mans. Tommy Milner qualified the No. 3 ninth on the GT grid, and the American powered his way to sixth by the third lap. A pit stop under caution at 27 minutes into the race split the two Corvettes' strategy and put the No. 3 in position to move to second. Milner brought the No. 3 to the pits at 1:25 and handed off to Olivier Beretta.

Shortly after the two-hour mark, Beretta radioed that the gearbox was smoking. Crew chief Dan Binks instructed him to take the car directly to the transporter. The crew removed the gearbox for repairs, but the damage was terminal and the car was retired.

"On the restart, some cars were accelerating, some were slowing down, it was just a mess," said Beretta. "After the traffic jam, the car was good, but in six or seven laps, the rear started to feel very strange. I thought that maybe I just needed to clean my tires, but the car was super loose. I think I had oil leaking onto the rear tires."

"The final drive failed and broke the gearbox case," explained Binks. "It's unfortunate, but that's the way it goes sometimes. Our year wasn't great, but we won Le Mans, and that was exciting."

The No. 4 Corvette won the Michelin Green X Challenge for the fourth time this season. The award recognized the fastest, cleanest, and most efficient entry in the GT class.

"Corvette Racing's fourth win in the Michelin Green X Challenge this year is a testament to the interest and dedication that Chevrolet has in finding innovative ways to improve the efficiency of its road-going vehicles, and we lead the way in racing," said Corvette Racing program manager Doug Fehan.

"Not every race goes exactly as you plan it, and this was one of those events," Fehan noted. "We had a very unfortunate and uncharacteristic gearbox failure in the No. 3 Corvette that knocked it out of competition. As so often happens, the team rallied around the No. 4 Corvette. Although the drivers were happy with the car, we couldn't maintain the pace with the leaders. The crew ran great pit stops, the engineers had great fuel strategy, and everyone executed well – but today we finished fourth. We'll happily take that as we move into winter testing."