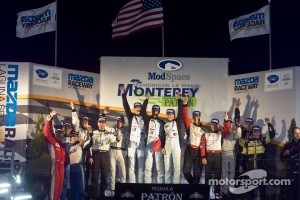 As pitstop cycles played out throughout the race, the no. 66 Porsche never slipped further than third place as the race played out in the Northern California afternoon. After starting in second, Pumpelly ran in second while Ende would take the lead and Ludwig would slip to third as a result of his pit stop.

Ende, the second driver in the car, would play a key part in the victory. After Pumpelly started the car and turned it over in second place, Ende was able to work his way into the lead of GT-C. Throughout the final portion of his stint, Ende battled with Damien Faulkner in the no. 34 Green Hornet Porsche but was able to keep his TRG Porsche in the lead of the race until he turned it over to Ludwig.

In the final hour, with Pumpelly at the helm, the team opted to pit for a fresh set of tires with under thirty minutes remaining. A late race caution put Pumpelly back within shot of the leading Black Swan Porsche, taking the lead back with five minutes remaining. At the end of the race, Pumpelly had a scant four seconds in hand over the second-placed Black Swan Racing Porsche.

"What a race - that was like a six hour rollercoaster," said Ende. "We were near the front throughout the race but with the way that traffic and pitstops and yellow cautions work out, it's difficult to be completely on top of where you are. Spencer and Peter did an amazing job today. You couldn't ask for a better teammate than Spencer and Peter did a great job stepping in for us today. It was really satisfying to get up into the lead and battle to stay there. It was really slippery and traffic is always tough when you're in GT-C, so I was really happy with how it went. Calling Spencer in for tires in the last hour was a gamble, I thought, but it obviously paid off and I'm excited to get another win!"

Team owner Kevin Buckler was equally thrilled about the victory for the no. 66 TRG / STANDD.org / Racer's Roast Porsche 911 GT3 Cup.

"The guys in the no. 66 drove a near perfect race," said Bucker. "I thought Duncan's drive today was without a doubt his best of the year. We are really looking forward to making a run at the championship in Atlanta in two weeks."

The win is Ende and Pumpelly's third of the year, as well as their sixth podium result in eight races. The two are still second in the championship, with Black Swan's Tim Pappas holding a 21 point lead over in the GT-C driver's championship with one race remaining - the ten hour or 1000 mile Petit Le Mans at Road Atlanta near Atlanta, Georgia.

"For us to win the championship, all we can control is how we finish," said Ende. "So it takes the pressure off a little bit because all we care about is going for the win. We can't control what the other guys do, so we are just going to put our head down and go for it. Nothing would be better than closing the season out with a win for these guys!"

The Petit Le Mans, which will go green on Saturday, October 1 at 11:30 AM ET, will be shown live on ESPN3.com with a television broadcast the following day on ABC at 4:00 PM ET.

Over the course of the weekend, Ende and his team collected 225 STANDD pledges from spectators pledging to not drive distracted. The mission of STANDD is to educate the public on the dangers of driving distracted, with pledges being accepted at the TRG pits at each American Le Mans Series race.