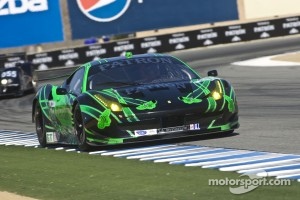 But before the first trophy was exchanged during the podium ceremonies-word came down from ALMS officials that the third place car of Risi Competizione had been penalized for avoidable contact and moved down to sixth position-bumping van Overbeek and his teammate driver/owner Scott Sharp into third place and rushing them off to take place in the ceremonial honors, while Guy Cosmo and teammate Ed Brown in the 02 car coasted across the line for a respectable eighth place finish.

"Certainly we all feel that a podium finish is long overdue," said Sharp. "But it's a weird way to get it with Risi getting penalized, but nevertheless we had a great day today despite a few issues with chasing the tire pressures and the handling on the car. We had a really tough time in traffic but we tried to persevere and the crew did an amazing job and we had really great stops. So at the end of the day we were in contention all day and Johannes finished just behind the leaders-so we are definitely making the right steps forward."

The Extreme team launched themselves off the grid today for the start of Round Eight of the American Le Mans Series presented by Tequila Patrón and within minutes-the duo of Guy Cosmo and Johannes van Overbeek were running the sleek black and electric green sister machines in tandem-tackling the massive elevation changes in the famed corkscrew and making their own path across the historic surface of Mazda Raceway Laguna Seca.

The Italian muscle of the 01 and 02 Tequila Patrón Ferrari 458's are being run through a rigorous development program this season and the Extreme Speed Team has been working diligently to maximize the car's potential and battle their way toward the top of the speed charts in the ultra-competitive GT class.

The weekend began well for the team as the cars began to show rapid progress and moved toward the top of the speed charts early on in practice. In fact just this morning, van Overbeek took the #01 car to the top spot on the GT roster in the warm-up session, which set the stage for the main feature in the afternoon.

Just over an hour into the race, the driver exchange began with Scott Sharp and Ed Brown stepping in to take command of the second stint. Both maintained good track position despite the high traffic and the Tequila Patrón Ferrari's settled down to business for the duration of the race with smooth driver changes and a steady hunt to gain ground in the thick of the GT pack.

With just under an hour to go, Sharp-who had made a huge push to the front--driving the 01 machine all the way to second place in class at one point, turned over the reins for the final stint to van Overbeek, who joined teammate Cosmo to bring the cars to the finish line.

"We put in another valiant effort," said Cosmo of his overall run. "The car ran really well all day-very solid. We just didn't have the pace overall to stay up toward the front. Ed (Brown) turned some of his best lap times of the race, and he is really hungry for a win, so we will be doing a lot of preparation before we show up for the next one in Atlanta. We made a lot of headway mechanically with the cars and we think we have sorted out a lot of stuff that will help us down the road. We finished with a nice clean race, no mechanical issues and no contact so we will take eighth place-no problem!"

The Extreme Speed Crew is already looking toward preparations for the next event on the American Le Mans Series Presented by Patrón calendar at the season finale at Road Atlanta for the 10 hour challenge of Petit Le Mans in just a few short weeks.