After a roller coaster weekend of on-track highs and lows at Mosport--the Extreme Speed Motorsports team is geared up and ready to put the past behind them and look toward some old fashioned redemption at Mid- Ohio Sports Car Course.

Despite maintaining a strong pace throughout practice and qualifying--highlighted by driver/team owner Scott Sharp's season best 4th place qualifying effort in the extremely competitive GT category--both ESM entries found themselves victims of circumstance on the twists and turns of Mosport.

Contact with Tony Burgess' LMP1 car and a pit road penalty within the first hour waylaid Sharp and co-driver Johannes van Overbeek in the No. 01 Tequila Patrón Ferrari. The No. 02 sister machine piloted by Ed Brown and Guy Cosmo also fell victim to contact with GT competitor Joerg Bergmeister at the 1:07 mark. A subsequent cut tire left their Ferrari F458 Italia mired deep down in the running order. 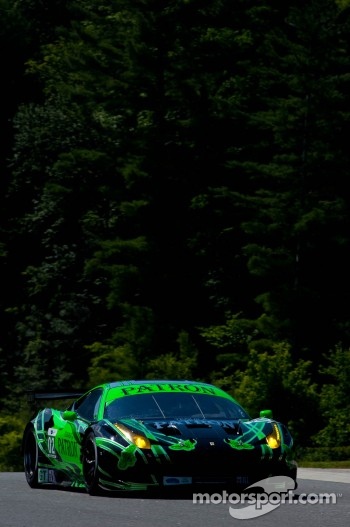 Despite the misfortune, the Extreme Speed crew fought back, rallying to finish ninth and thirteenth in the No's. 01 and 02 respectively.

After a week away from the track, the ESM team is headed to Mid-Ohio determined to match results with the promise they showed at Mosport.

IN THE DRIVERS SEAT:

"I'm glad we're going to Mid-Ohio as my luck there has always been pretty fair-having won three ALMS races in the last seven seasons.

The one thing we've been missing this year is luck--so hopefully my past success at Mid-Ohio will help get us pointed in the right direction and push us toward a podium!

The ESM crew does such an amazing job every weekend, that as always, can't wait to get the weekend started!"

Scott Sharp, driver of the No. 01 Tequila Patrón﻿, Ferrari 458 Italia

"I think Mid-Ohio is one of the most challenging circuits in North America. The demanding variety of corners - uphill, downhill, off-camber, present huge challenges for both teams and drivers alike. When you get it right - it's thrilling.

The ESM Patron team has put a lot of effort into our Ferrari 458's this season and we have learned a lot learned a lot in the last few races-so I am confident that we can enter the weekend with high expectations and gain some ground for a strong finish.

As a team, we all look forward to the Mid-Ohio weekend. With ALMS and the INDYCAR Series sharing the same weekend, it's action packed for a very passionate racing crowd. We're sure to have a lively group at the Patron tent!

"Mid-Ohio has always been one of my favorite tracks ever. I began racing here in 1997 racing Formula Ford 1600, and in preparation for the SCCA Runoffs every year. In fact, I pretty much raced at every available race held at Mid-Ohio that year, and for a few more years as well! I've won more races at Mid-Ohio than anywhere else, and always called it my favorite track.

It's a very challenging course, and quite a workout on the driver as well. You have to really think and plan your way around this track as if you're playing a game of chess - because whatever move you make for one corner will definitely have an effect the following corners. I've been around here so much that it's second nature to me--but to a driver that doesn't know the nuances of Mid-Ohio, it can be very frustrating!

Last year we ran well, Ed and I. I started the race and kept us in the hunt for the first half, and then turned over to Ed - who did a great job, but got hit by another car and ended our race. Ed and I are both looking for redemption from last year and finish where we deserve - in the top five."

"Mid-Ohio is one of the great tracks in the country. The layout gives you so many different types of corners: fast, slow, blind, off-camber. You name it, Mid-Ohio has it. That's why it's always a huge challenge.

Personally, I feel like Mid-Ohio owes me! I have had some bad luck in the two races as we DNF'd due to getting knocked out of competition. I am looking forward to better luck and a bit of redemption this year!"

Risi Competizione On A Roll Heading To Mid-Ohio ALMS