Braselton, GA, September 30, 2011-The 14th Annual Petit Le Mans at Road Atlanta brought trial and tribulation and a little bit of triumph, as well as twists and turns for Extreme Speed Motorsports today.

Deemed a challenging and adventurous circuit by drivers and fans alike-the swift 2.54 mile, 12 turn circuit didn't hold back today for qualifying for the final event in the American Le Mans Series presented by Tequila Patrón. 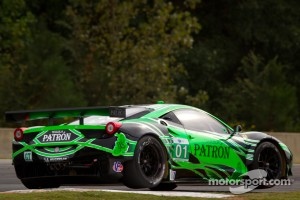 Veteran pilots Johannes van Overbeek and Guy Cosmo shook down the two sleek Ferrari 458's for today's qualifying efforts with split result, placing the 01 Tequila Patrón entry on the grid in sixth position for the start of tomorrow's grueling ten hour endurance race, and the 02 car four positions behind its sister car in tenth.

"Sixth isn't what you would normally be happy about," said van Overbeek. "But we have had a challenging year and right now we are really, really competitive-especially with the other Ferrari's so we are making strides. Most importantly the car felt good, so I think we have a good racecar for tomorrow."

Cosmo, who began the session strong, charging all the way to fifth position, began to falter due to minor handling issues, and the inability to find clear track to make a challenging run.

"It's very frustrating," he said. "We've been very fast all week, but it always seems to be the same story when it comes to qualifying. There are a few other teams out there that always seem to have a trick up their sleeve and we are working as hard as we can to have an honest effort and an honest set up and we are always running to our potential. There's some magic out there that the others are finding that we just can't seem to discover."

With final best lap times of 1:19.511 and 1:19.205 respectively for the 01 and 02 cars, both Extreme Speed Motorsports entries are still in the thick of battle, merely tenths off the pole sitting pace in the highly competitive GT class facing off with respected international competition this weekend.

Both cars have been consistently quick all week long in testing and practice, proving that great developmental strides have been made over the course of the 2011 season. For tomorrow's endurance war, Sharp and van Overbeek will be joined by German Dominik Farnbacher, while Cosmo and Brown will be partnered with Englishman Rob Bell.

Looking Back---A question was posed to the "Extreme Team" this weekend to share their most exciting or memorable moment in the 2011 Season. Here are their own words...

"That's a tough one to answer especially when you have the most enjoyable job on the planet! It's been a year of such growth, determination and strength for the team that I am at a loss to answer that question!"

"It's every week that we show up! We learn from each other and we have made tremendous strides this year and we are one big happy family-so just being here together is what matters and what I enjoy most!"

"Qualifying for me at Mosport was definitely my highlight! I just really had the car working well that day! We ran two laps and qualified in the top four and the car just felt great. Sometimes the simple moments are the best."

"Finishing on the Podium at Laguna Seca in front of all of my family and friends! Couldn't ask for a better end to the weekend." 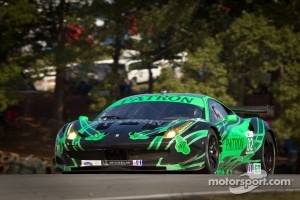 "Without a doubt my best moment was at Baltimore this year. It was the biggest event I had ever been to and I just didn't expect to see so many people that didn't know about racing-that were absolutely so excited to come out and see the cars and the series."

"Getting a podium finish last weekend with the guys at Laguna Seca was great! Being new to the team it's been a pleasure getting to know everyone and being able to share in that moment."

"Definitely the Grid at Baltimore! It was so amazing-there were so many fans you couldn't even see the cars! The fans were very receptive and it was inspiring for the team."