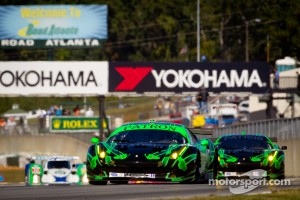 Braselton, Georgia, October 1, 2011-The Extreme Speed Motorsports team finished in exactly the same positions as they started today, amidst a high speed traffic jam under cool but sunny skies at Road Atlanta for the 14th Annual Petit Le Mans, Powered by Mazda today. But while the first and final chapters of the event sound the same-the winding ten hours of tight competition told a completely different story.

Both cars started and finished in sixth and tenth position, a remarkable accomplishment considering the drivers and crew of the #01 and #02 sister Tequila Patrón entries navigated their way through the largest starting field in Petit history of 53 cars. The GT division alone played host to 18 entries-increasing traffic, chance for incident and elevating competition to a dramatic level.

A full season of dedicated and concentrated effort toward developing the highly intricate Italian muscle of the Ferrari 458 Italia's is marking clear progress and dividend in the form of a recent podium finish at Mazda Raceway Laguna Seca, and an amazing charge to the front of the GT pack earlier today in competition.

The ever-popular gleaming black and electric green Tequila Patrón Ferrari's leapt out of the gate to the front of the ultra-competitive class early on with "usual suspects" Guy Cosmo and team owner/driver Scott Sharp beginning the first stint and making an early charge.

By lap 65 and barely two hours into the grueling 10 hour endurance finale for the 2011 American Le Mans Series presented by Tequila Patron, Cosmo had his Italian horsepower under a tight rein and rocketed the 02 car from a P10 starting position up the grid to third in a tight battle with Porsche and BMW.

With his usual dogged determination, endurance veteran Cosmo continued to nudge forward to take second by lap 75, but a minor incident in the pits on Lap 196 involving the left rear set them back eight laps behind in class, and back to their original starting position.

Despite the result, Cosmo still remained optimistic regarding their performance as it relates to their efforts throughout the course of the year and truly enjoyed the partnership this weekend with regular teammate Ed Brown and the addition of Englishman Robert Bell to the ESM stable.

"When I was asked the other day what my favorite part of the season was--I now want to change my answer," said the always optimistic Cosmo. "Today was IT for me! Despite the core result based on the fact that we had a mishap with one of our pit stops and lost a few laps, we were definitely one of the cars to beat on track today. The team just did a remarkable job, and so did my teammates-- and the car was phenomenal. My charge all the way up to second place today was some of the most fun I have ever had behind the wheel, and to be able to do it under the umbrella of Tequila Patrón and Extreme Speed Motorsports and its incredible group of people was one of the most rewarding experiences of my career so far."

With the usual driver swap at the wheel of the sister 01 machine, showing steady progression proving that developmental efforts were paying off, German Dominik Farnbacher, the newest edition to the 01 car driver line-up, Sharp and Johannes van Overbeek pushed their way up the GT ladder to take second place as well--just behind BMW, until a shredded left rear tire for the BMW entry surrendered the lead on lap 185 and just under the halfway mark.

As all endurance races are a true test of skill, determination, and most importantly--longevity, as the ten hour contest progressed, many teams and cars began to fall victim to minor issues or contact, turning the timing results into a puzzle piece of scattered incidents. Alas van Overbeek's blazing run was also cut short due to contact resulting in a flat right rear on lap 245 which, while easily and efficiently fixed, moved the team back down into sixth.

"The ESM Patrón guys never quit all year and we finally got the car good here and got up in the lead and hung in there for a while," he said. "Unfortunately about halfway through the race, the track was blocked in turn seven and I slowed down to avoid stoppage and was rear ended by two different cars-and that caused a flat right rear that took us out of contention at that point. It's a shame, everyone worked very hard and we were very strong."

Farnbacher, while new to the team, blended seamlessly with his drive and determination to push 458 Italia's into the thick of battle.

"We tried to win the race-and we had the chance to do it," he said. "Scott (Sharp) and Johannes (van Overbeek) were very strong in the beginning and the first three sessions we went out-we were able to come back in with the lead. Johannes was quite unlucky being hit from the rear of the car, and since it was right after pit entry, we lost two laps. If this would not have happened, I think it would have been a great result. The team did just a phenomenal job and put on a first class performance."

And while this chapter of the 2011 season comes to an end, the green, chrome and black glimmer of promise remains on the horizon as team and drivers alike look forward to increasing their momentum and realizing continued success.

"We have a head start now," said Cosmo. "We have the cars sorted as well as how we execute the races and I think next season is going to be the year we start collecting some trophies and some hardware!"