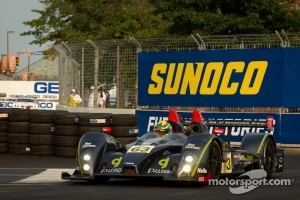 BALTIMORE, MD, September 3, 2011 - For the second time in as many races, Genoa Racing brought home a second place finish, this time in the inaugural running of the Baltimore Grand Prix. With the finish, the Zionsville, Indiana based team edged even closer the LMPC points lead, as championship leader Core Autosport settled for third place in the two hour race.

The weekend got off to a good start despite delays in completing the construction the 12 turn, two mile street course in Baltimore's Inner Harbor district. The Genoa tandem of Eric Lux and Elton Julian and the No. 63 green dot/p.u.r.e./ZaisGroup ORECA FLM09 were consistently in the top three in American Le Mans Series - Presented by Tequila Patrón practice.

With Julian behind the wheel, qualifications were shaping up to be even better until contact with the wall brought the session to an end. At the time of the contact, Julian had posted the fastest lap of the session and was forced to watch as two cars posted slightly quicker times in the remaining minutes of qualifications.

The team made repairs overnight, and the car was ready to go in plenty of time for warm up Saturday morning. The car never missed a beat, finishing the session on top of the LMPC class.

"You kind of expect a little contact in street course racing," said Genoa mechanic Chris Oldham. "I have to give a big thanks to our sponsor Zyvex for a fantastic product. It was a big part of why we could turn the car around and put fast times on the board."

In the race, Lux quickly advanced from his third place starting position to second in the opening laps. The Genoa driver settled into a rhythm, turning fast laps and maintaining a solid gap over third place. The team took advantage of a full course caution right at the midpoint of the event to refuel, change tires, and complete a driver swap. Julian reentered the fray in second place but could not track down eventual winner Kyle Marcelli, caused in part by chronic brake issues. Julian managed to hold off a hard charging Frankie Montecalvo in the closing laps to preserve the second place finish.

"The car handled excellent and I was able to pass a few cars on the outside of the hairpin for second position," reflected Lux. "I was pushing for the lead, but experienced brake fade about 18 minutes into the race. The brakes could not recover, so I drove cautiously for the rest of my stint and turned the car over to Elton in second place. The team had a great pit stop and Elton did an excellent job maintaining track position with the brake condition. Thomas and the rest of the crew have help us close the gap for the championship; the last two rounds will be exciting!"

"I have to thank Genoa Racing for having a great setup for us at a first time event," Julian said. "It really shows what the team can do and how experience really works in your favor in these situations. We were fast right away, which let Eric and I focus on learning the nuances of the circuit. A bit of brake fade kept us from winning today, but we were able to really tighten up the championship. It's going to be a very exciting battle to the finish over the final two events."