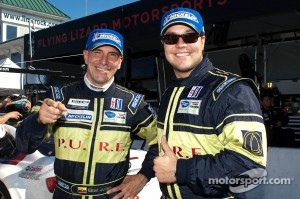 Road America was a mixed bag of emotions for the Zionsville, Indiana based squad. The Genoa trio of Eric Lux, Elton Julian, and Christian Zugel dominated for most of the afternoon in the No. 63 green dot/p.u.r.e./ZaisGroup ORECA FLM09, only to see the class win slip through their fingers with under an hour remaining. Despite the disappointment, Genoa racing was thrilled to gain three valuable points in the season championship on class leader Core Autosport, who fell behind early and settled for fifth.

Genoa enters Baltimore with high expectations. The duo of Elton Julian and Eric Lux combined for a third place finish in Long Beach, the most recent street circuit on the schedule. It will be the same pairing behind the wheel this weekend.

Baltimore, however, figures to be an extra challenge. The two mile, 12 turn layout is brand new to all of the competitors this weekend, which puts and extra burden on the engineering staff to have as good of a baseline setup as possible. The circuit itself features an interesting combination of high speed sections and contrasting hairpins. Add the manhole covers and changing, uneven surfaces of the city streets to the diversity of the layout and its clear driver and crew have a complicated equation to solve.

Despite the difficulties inherent in a new event, Julian is excited to meet the challenge head on.

"I really enjoy going to a new circuit because it is an equalizer for the drivers and teams," he said. "Some guys like to use video game simulations, but I just like to walk the track and go for it!"

Both drivers say they appreciate and enjoy the challenge of street course racing. "Both Elton and I thoroughly enjoy racing on street courses," said Julian's co-driver Lux. "We are planning to do everything possible to be on the top step of the podium in Baltimore. Genoa Racing and Thomas Knapp have given us a great car at each event this season. It would be great to win the first Baltimore Grand Prix and especially because we will have many of our green dot/p.u.r.e./ZaisGroup sponsors at the race."

With the points lead in sight, a strong drive in Baltimore could be the turning point of the season. While his concentration remains primarily on his own performance, Julian offers that this is the part of the schedule in which he begins to pay attention to the points.

"As always the focus is on my own performance, but at the same time it's the time of the season when we start to pick our heads up and see where we are in the standings," said Julian. "We will take it race by race and do the math at the end."

Although he would prefer to be on top of the standings, Lux is happy with the position the team finds itself in. "The races this season have been very competitive," said the Genoa driver. "After six races we are in the thick of the LMPC championship battle. I know that the Core Autosport drivers and team are feeling the pressure, and we're going to keep the pressure on."