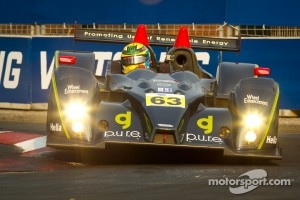 ZIONSVILLE, Ind., September 15, 2011 - Fresh off yet another podium finish in Le Mans Series competition in Silverstone, Genoa Racing is back stateside for the eighth round of the American Le Mans Series - Presented by Tequila Patrón at Mazda Raceway Laguna Seca.

With two races remaining on the ALMS calendar, Genoa Racing sits a mere two points out of the Le Mans Prototype Challenge class championship lead, and currently holds second place in the European standings as well following a second place finish at the prestigious 6 Hours of Silverstone. In the driver standings, Genoa pilot Eric Lux is just a single point behind Riccardo Gonzalez in the LMPC category.

This weekend, the team returns to the Monterey circuit where they finished third in the LMPC class one year ago for the six hour ModSpace American Le Mans Monterey presented by Patrón.

Genoa will field the No. 63 green dot/p.u.r.e./ZaisGroup ORECA FLM09 for team regulars Lux and Elton Julian, who will be rejoined by Michael Guasch for the six hour endurance test. In his last outing with the team, Guasch took class honors at the prestigious 12 Hours of Sebring. The trio has high hopes that they can continue the strong form they have shown in recent races, with the ultimate goal of reclaiming the points lead before the season finale at Petite Le Mans.

"I'm sure that Genoa Racing will provide Elton, Mike and I with an excellent car for the race," said Lux. "They have delivered each race this season; even when we have experienced issues we have been able to finish in the Top-5. Mike drove our sister car to victory at Sebring this season. I have never raced with him before, but I know Laguna Seca is his home circuit. I am sure that Elton, Mike and I will be at the top of the charts when it matters most: the last lap of the race."

Californian Guasch is looking forward to rejoining Genoa at his hometown track.

"I have raced at Laguna many times in the last few years, and since I live approximately two hours north of the track it is essentially my home circuit," said Guasch. "I am especially looking forward to running with Genoa and racing in the LMPC class again. We had a fantastic week at Sebring earlier this year topped off with the LMPC win. It would be nice to get back on the top step of the podium. I am confident that Elton Julian, Eric Lux and I will be very competitive."

"I really enjoyed my first visit to the circuit last year when we finished third and I'm looking to improve our championship position before the last race of the season," said Julian. "I'm excited to work with Michael and I look forward to working on setup and race strategy with the team."

Six hours at Mazda Raceway will be a challenging task. The 11 turn, 2.238 mile course features many high-speed, sweeping corners with large G-loads on both driver and car. Massive changes in elevation, 180 feet from highest to lowest point, are frequent and abrupt. Between turns eight and nine alone, the track drops 109 feet in altitude, the equivalent of over 10 stories. The course puts an emphasis on endurance as a result, and is a trying enough test without factoring in traffic caused by cars from multiple classes.

Cosmo heads to bay by Monterey