Genoa Racing Looking for Back to Back Wins at Road America 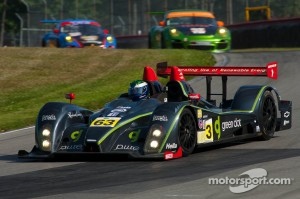 Following a wildly unpredictable race at Mid-Ohio, Genoa Racing heads to Road America looking for another podium and a chance to reclaim the LMPC points lead. Despite finishing off the podium-their first non-podium finish of the American Le Mans Season, Genoa finds themselves just eight points back of class rivals Core Autosport. A return to the podium on one of North America's most revered circuits could be the turning point the team has been searching for as Genoa fights for prototype championships on both sides of the Atlantic.

Mid-Ohio-round five of the ALMS calendar-had it all: fast speeds, close on track battles, and plenty of drama. Genoa pilot Eric Lux started the No. 63 green dot/p.u.r.e./ZaisGroup ORECA FLM09 prototype, and quickly surged to the LMPC class lead from his fourth place starting position.

Lux then settled into a thrilling duel for the lead which saw the top position swap hands between Genoa and Intersport for laps on end. A pit road penalty waylaid the team's progress, but the team rallied to mount a charge in the final stint after Lux reentered the car, replacing co-driver Christian Zugel.

But Mother Nature had other plans. With time winding down, torrential rains ultimately rendered the course too dangerous, causing the series to call the race early. Despite a strong pace, Genoa was relegated to a fifth place finish.

Lux is confident Road America can provide the boost the team needs in the championship hunt. "We are still just behind Core Autosport for the lead in the championship," said Lux. "We are planning to close that gap this weekend. There have been some great battles so far and I'd expect nothing less for this round! Hopefully, we'll bring home a win for Genoa and we can take the points lead outright."

Road America is yet another classic road racing venue. At just over four miles in length, Road America is easily the longest track on the American Le Mans Series-Presented by Tequila Patrón calendar, and is a true test of both driver and car. High speeds and massive elevation changes equate to high G-loads, especially in the prototype classes. Tackling the famous "Kink' at full throttle is one of the most daunting challenges in all of motorsports. For mechanics, finding the appropriate balance of raw speed and aerodynamics for the long straightaways and the downforce necessary for the turns is a critical compromise.

The Genoa squad knows the challenge of Road America well. A year ago, Genoa finished first in class and fifth overall with drivers Gunnar Jeannette and Elton Julian, and aim to repeat that performance this year with the duo of Zugel and Lux.

Past success aside, everyone at Genoa Racing relishes an opportunity to race at Road America. "One of the best things about running in the American Le Mans Series is that we get to run at great racetracks like Road America," reflected team principal Mark Scott.

Track activity for the Time Warner Road Race Showcase begins with an hour and a half of testing Thursday afternoon from 1:15 to 2:45 PM local time. Practice continues Friday with two hour long sessions at 9:20 AM and 2:00 PM, followed by a 15 minute qualifying run at 3:45. A final 20 minute warm up will be held on Saturday morning at 10:15 AM, followed by the four hour race at 3:00 PM.