Braselton, GA, October 1, 2011- They've never wanted the biggest crew. They've never needed the most lavish shop. They've never had a massive budget. What the nimble, efficient team from Zionsville, Indiana proved this weekend at the 14th Annual Petit Le Mans Powered by Mazda at Road Atlanta, is that they are not the "Little Team That Could", but instead the "Proficient Team That Just Did." 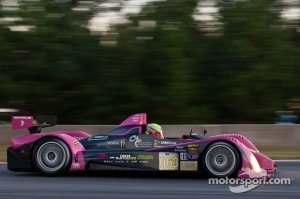 Genoa Racing has brought an abundance of three dynamic, human qualities to many motorsports series for more than 30 years: Passion. Pride. Perseverance. All of which were pivotal to the culmination of one of the most amazing and dramatic championship battles in ALMS history-leading to a Series "First," a three-way tie for the Driver Championship and the most narrow points margin in LMPC history.

The No. 063 green dot/p.u.r.e./Zais Group ORECA FLM09 crossed the finish line last night in fourth position after a dramatic and nerve wracking battle with CORE Autosport for ten grueling endurence hours on the 2.54 mile winding road course, missing the LMPC Team Championship honors by only a single point for the American Le Mans Series presented by Patrón.

Christian Zugel and Elton Julian have been routinely straddling the globe to tackle the two championships in the 063 car, and LMPC Driver Points Champion Eric Lux contributed to their US efforts in an amazing year that includes two pole position starts, and six podium finishes in United States competition, as well as three out of four podiums in Formula Le Mans.

The race began fast and furious as Lux shot out of the box to push the 063 car to the front of the field early on in the 1000 mile balance of strategy and speed, but tragedy struck on lap 114 as the car coasted to a stop with road course veteran Julian at the wheel.

The car was towed back to the paddock and much like déjà vu from Sebring-the Genoa Racing crew demonstrated their reputation for efficiency and were already pulling body work and starting repairs to the left rear axle and the driveline before the car was even off the carrier.

Despite the amazing teamwork and the quick and efficient repairs led by Crew Chief Steve Ragan, the team was 46 laps down once they rejoined the race.

Minor repairs to the car continued as the race progressed, and it was business as usual for Genoa, just under the halfway mark.

And then the scales began to balance.

Suddenly The 06 CORE entry failed due to power steering and engine belt issues exiting the pits with championship driver competition Gunnar Jeannette at the wheel. Commendably, the CORE team made swift changes, balanced by a long yellow, which put them back on track still ahead of the Genoa entry-but UAE based addition to the team--Jordan Grogor kept improving on the pace to reel in the competition.

And then the scales began to tip.

With just under nine laps to go, the 05 entry for CORE suffered an on-track incident, damaging the car and forcing it out of competition. In the ensuing laps, Genoa was able to overtake and claim the fourth place position, clinching the driver's championship and narrowing the team gap to just one point.

When Genoa decided to return to its sports car roots in 2010 in the ultra-competitive LMPC class in the American Le Mans Series presented by Tequila Patron, it was the little team that could.

Genoa produced one of the most remarkable seasons in worldwide sports car racing in 2011. The team started 2011 with a victory in the prestigious Mobil 1 12 Hours of Sebring in March and also won at two other classic American tracks, Lime Rock Park and Mazda Raceway Laguna Seca. Genoa clicked with the consistency of a high-horsepower metronome all season, finishing in the top three in eight of nine ALMS races.

That success was just half of the Genoa story in 2011. The resourceful team from the Indianapolis suburb of Zionsville, Ind., also competed in the FLM class of the Le Mans Series across Europe. Genoa didn't just show up on The Continent to complete the numbers, either. It finished second in three of its four starts, at famed tracks Paul Ricard, Spa and Silverstone.

Think about that for a second. Genoa has just six full-time employees and 12 seasonal crew members. Just a 7,200 square-foot shop. Yet in this "bigger always is better" era of worldwide motorsport, Genoa was the only privateer American team to crisscross North America and Europe throughout spring and summer of 2011 to compete in the ALMS and LMS. And it won a drivers' title and second in team championship in an extraordinary season long battle.

Few privateer teams of any size could imagine a schedule that requires that kind of petrol-powered passport. Even fewer could pull it off successfully.

But there's always been a special something at Genoa, that key ingredient essential for success that can't be bought in a parts catalog or machined in a race shop: People.

The foundation for Genoa's current success began in 1991 when team owner and businessman Angelo Ferro, a San Francisco native who spent his childhood near Genoa, Italy, began working with respected team manager Thomas Knapp. They blended their unique skills into one of the longest, most successful owner-manager duos in North American racing.

And along the way, the dynamic duo of Ferro and Knapp have added experienced, savvy people like crew chief Steve Ragan, engineer Leon Gutfreund and sporting director Tom Sedivy. Their diverse backgrounds and unique talents have fused into a group with a singular goal of pure performance, regardless of the circumstances.

No private sports car team accepted challenges like Genoa Racing in 2011. And Genoa delivered with passion, pride, perseverance - and championship performance - in a simply remarkable season.