The American Le Mans Series finds itself going west this weekend, where the drivers and teams will have to adapt from the wide open nature of Sebring to the tight confines of Long Beach. 2011 marks the fifth consecutive year for the series to race at the famous street circuit venue which provides many unique challenges to the competitors. With the race only being two hours long and run on public roads with concrete barriers lining the circuit, one small mistake can derail a team's chances in a heartbeat.

With prototype numbers down, the GT battle will be the class to watch.

Last year at Long Beach a thrilling battle was fought at the end of the race in the LMP category with Simon Pagenaud grabbing the lead for Highcroft Racing and HPD from Adrian Fernandez and Aston Martin Racing on the final lap. Sadly a prototype battle as exciting as last year is a bit unlikely due to new regulations and difficult economic times leaving the 2011 LMP classes with a total of four cars. Muscle Milk Racing should be the favorite for the win in their Aston Martin against Dyson's Lola B09/86. There is optimism in the paddock, however, that as many as five to six LMP1 cars will contest the next ALMS round in July at Lime Rock Park.

With prototype numbers down, the GT battle will be the class to watch. BMW Team RLL looked unbeatable at Sebring as they came away with a 1-2 finish at the 12 hour classic. They'll certainly try to continue that domination, but nothing is easy with the level of competition GT has to offer. 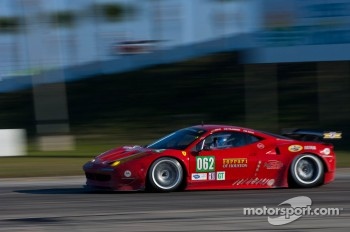 Porsche's new 2011 spec GT3 RSR looked rather off the pace in Florida and IMSA has taken away 25kg of weight from the car in hopes of making it a bit more competitive in the class. With the weight break given to Porsche, picking a winner becomes a bit harder as the class is extremely deep. BMW will certainly be tough to beat and Flying Lizard and Corvette Racing will be in the mix, but Risi Competizione's new Ferrari F458 is our favorite for the win. Risi managed to run near the front in Sebring with only a week's time to prep their brand new car. Imagine the progress the Houston based squad has made in a month.

Rounding out the grid will be the LMPC and GTC classes. It should not come as a surprise if an LMPC car runs near the front during the race and could possibly even take a surprise victory if mechanical troubles strike the LMP cars. In GTC it is tough to bet against the professionalism of Black Swan Racing and their ace driver, Jeroen Bleekemolen certainly does not hurt the team's chances.

With the short race distance and the tight nature of street circuit racing, emphasis will be placed on qualifying which you can catch live Friday evening on ESPN3.com at 8pm Eastern and the race live Saturday at 7:15pm Eastern. A tape delayed broadcast of the race will air at 5pm Eastern on ESPN2 this Sunday.