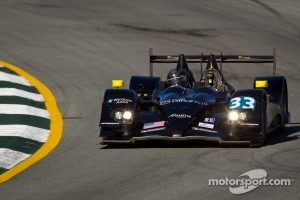 It was the second consecutive LMP2 win for HPD and Level 5 since the debut of the new, cost-capped ARX-01g two weeks ago at Laguna Seca. As in that event, the winning car was driven by Christophe Bouchut and Scott Tucker, with Joao Barbosa rejoining the team for this weekend’s 14th annual Petit Le Mans, a 1,000-mile endurance racing classic at Road Atlanta.

As at Laguna Seca, Level 5 Motorsports scored a dominant victory in LMP2, taking the new HPD ARX-01g to an eight-lap victory over the United Autosports Oak-Pescarolo Judd of Stefan Johansson, Mark Patterson and Zak Brown.

The Level 5 driving trio of Tucker, Bouchut and Barbosa enjoyed an early-race battle with the Signatech Nissan Oreca 03 Nissan of JK Vernay, Franck Mailleus and Lucas Ordonez, before the Nissan ran into power-steering issues in the sixth hour, dropping to an eventual third-place finish. That gave the Level 5 trio clear sailing to the end.

Level 5’s sister HPD entry, co-driven by Tucker, Luis Diaz and Marino Franchitti, qualified on the LMP2 pole but started from the pit lane after encountering electrical issues. The car raced to the front of the field in the opening hours, then was delayed by a turbocharger issue before rejoining to finish fifth.

"What an amazing race today. The Level 5 Motorsports team repeated its excellent performance at Sebring by bookending the 2011 American Le Mans Series season with a win against worthy competition from across the globe,” said Steve Eriksen, vice president of HPD. “Congratulations to Level 5 on this win and the American Le Mans Series LMP2 championship.”

An evolution of the pace-setting HPD ARX-01d run by several LMP2 teams in 2011, the HPD ARX-01g is designed specifically to meet the ACO’s new cost-capped LMP2 regulations for private entrants.

HPD also recently announced its plans to return to LMP1 competition in the new FIA World Endurance Championship with another chassis evolution, the ARX-03a, powered by an HPD-developed, normally aspirated 3.4-liter V8 engine.

“This is the perfect way to end the first season of the new 2011 HR28TT V6 turbo engine, which was co-developed by Honda Performance Development Inc. and Honda R&D Americas, Inc.,” said Eriksen. “The great results of the engine in its inaugural season speak to the results achieved by combining the talents of our production and race engineers in the crucible that is racing.”

“In addition, the HPD chassis showed its characteristic speed and high reliability, just weeks after the launch of the new ARX-01g cost-capped LMP2 version. Many thanks to our partners at Wirth Research and Michelin for all of their hard work in achieving this great result. We’re already looking forward to the 2012 American Le Mans Series season."