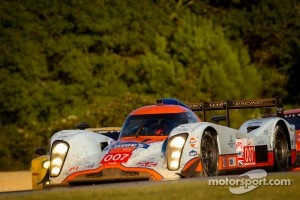 Road Atlanta, 1 October 2011. At the final round of the American Le Mans Series, and the penultimate Intercontinental Le Mans Cup round, Aston Martin Racing scored its second consecutive podium as it finished a superb third overall and the best-placed petrol car at Petit Le Mans. The 007 car finished just one lap behind the 2nd placed diesel car.

Despite a strong entry that included five competitive diesel racers, the petrol-powered V12 DBR1-2 ran flawlessly throughout the 1,000 mile epic to dominate the unofficial petrol category with a clear four-lap margin to the nearest challenger.

Mexican ace Adrian Fernandez powered the Aston Martin Racing machine over the finish line more than nine hours after the race got underway to score the team’s second consecutive podium result in the series, adding to its brilliant outright victory at Laguna Seca two weeks before.

Alongside teammates Stefan Mücke (D) and Harold Primat (CH), Fernandez performed as reliably as his LMP1 steed and kept firmly out of trouble despite the heavy race traffic for almost 400 laps of the 2.54 mile Road Atlanta circuit. In a race dominated by 10 safety car periods, the team’s engineers devised and executed the perfect strategy and responded decisively to the many safety car interruptions to exploit the production V12 machine’s impressive pace and dependability.

As the blazing sun dropped behind the trees and darkness engulfed the Road Atlanta circuit, engine oil from the extensive grid of prototype and GT racers and debris from the trackside clung to the DBR1-2’s windscreen, limiting visibility during Mücke’s final stint. The mechanics cleared the offending grime to enable Mücke to continue before handing the reigns to Fernandez to cross the finish line.

Aston Martin Racing Principal, George Howard-Chappell said: “I am very, very pleased with our result; the car ran impeccably along with a fantastic team performance.

“The drivers drove exceptionally well and we are delighted to be fastest petrol car. It is sad to see our sister car, Muscle Milk Racing, suffer an engine problem but obviously nice to see the Gulf AMR Middle East Vantage GTE car run faultlessly.”

At the podium celebrations, Fernandez said: “It was a great team effort. The drivers worked really well together; we were quick when we needed to be quick and we were conservative and smart when we needed to be. Conditions were tough, especially at night, and visibility was poor when the light was fading, but we stayed on track and that’s what racing is all about.

“Winning overall at Laguna Seca and now third here against the top diesel cars makes me so proud of the whole team. I’m very happy. It’s fantastic for us and I want to thank the team and my sponsor Lowe’s.”

Primat added: “I feel great, it is amazing to be on the podium after starting with five diesel cars in front of us. We never thought it was possible at the start of the race. Just fantastic.”

The near-ten hour race was characterized by mechanical woes and driving errors as many of the entrants failed to last the distance. Aston Martin Racing further proved its sporting credentials in the GTE AM category as the V8-powered Gulf AMR Middle East Vantage GT2 finished a strong fourth in class.

The 007 Aston Martin Racing machine will next engage in battle at the final round of the Intercontinental Le Mans Cup at Zhuhai in China on 12 November 2011.