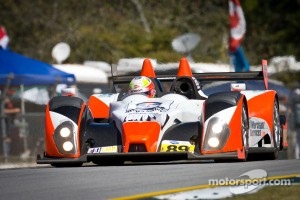 Fighting back from a devastating crash in practice, winning the class pole then being put to the back of the grid on race day, wasn't enough to stop the #89 Intersport Racing The Sitter / Muscle Milk / Merchant Services / Lafarge / DynaPep LMPC march to the podium at the 14th running of the American Le Mans Series presented by Tequila Patron Petit Le Mans.

Piloted by Tomy Drissi, Kyle Marcelli and Chapman Ducote, the Intersport LMPC car rose up from the ashes to dominate the LMPC over 999 miles of racing at the historic Road Atlanta road course.

Anyone witnessing the horrific crash of David Ducote during Friday's practice could not have predicted the ultimate outcome of Saturday's race. When a Ferrari GT car made contact with Ducote's rear quarter, the car was pushed partially off track. Fortunately several cars exiting the turn were able to drive around as the car sat perpendicular to the racing line. Suddenly, the Robinson Ford GT driven by David Murray was caught up in the incident. Quick thinking Murray immediately threw the Ford GT into a sideways slide and was able to shift the impact to a side by side as opposed to head-on. David was airlift to a local hospital and kept for observation.

The Intersport team sprung into action and quickly went to work repairing the car. Amazingly… and to everyones disbelief, taking spares from the team's #37 car, the #89 car was ready for afternoon qualifying. Kyle Marcelli climbed in and when the checkered flag was thrown on the session, Kyle was at the top of the time sheets.

"I can't say enough about the hard work our guys put in this weekend," said team manager Brian Alder. "And I don't know what to say about Kyle Marcelli… other than amazing. Kyle is as dedicated and talented as they come. He put his team on his back and left it all out on the track."

With David Ducote sidelined, driving duties were redistributed among Tomy Drissi, Chapman Ducote and Marcelli. Due to tech inspection questions regarding replacement parts from the teams #37 backup car, Marcelli was forced to start the car from the back of the grid. However, when the green flag dropped on the 1000 mile race, Marcelli wasted no time chasing down the rest the LMPC field. Intersport was heading to the front.

"The team made no secret about riding on Marcelli's talent," said Kyle's co-driver, Tomy Drissi. "First, he's earned it. He's consistently fast and takes care of the car. We knew Chapman and I had to stay on pace, be aggressive but keep the wheels on the car. The team was flawless with fueling stops and the driver changes where perfect."

Marcelli kept the team up front all day. Then, with just two laps to go, in traffic, the #52 car tucked himself into the headlights of a few P1 cars and Marcelli lost him in his mirrors. The #52 got by leaving the #89 to take second. A brilliant race and a brilliant drive by Marcelli none-the-less.

On the Cooper Tires Prototype Lites side of the team, Ricardo Vera ascended to the top of the IMSA Lites ranks taking the 2011 Drivers Championship. In the Thursday's round 13, Vera drove to a solid fourth place finish. Friday, in the season closing round 14, all Vera need to do to secure the championship was simply start the race. Never one to rest on his laurels, Vera drove to a 3rd place finish taking the championship and a spot on the podium.

“The Intersport Racing team gave me a great car all year,” said Vera. “I’m really happy to have won the championship! I knew that with the lead I had, all I had to do was finish near the top. It’s been great racing against everyone this year.”

For the 18-year-old Vera, the championship brings many awards, not the least of which is a test session in the Dyson-Mazda LMP car. To win the title in his rookie season means a great deal to the young Puerto Rican.