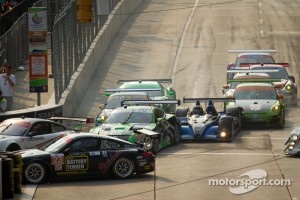 BALTIMORE, Maryland (September 3, 2011) - JaguarRSR had high hopes for good results in Baltimore for Round Seven of the 2011 American Le Mans Series presented by Tequila Patron. They made a lot of gains, showed promise, but didn't have a fighting chance after the drop of the green flag.

Due to a delay on Friday morning, because the new 2.0-mile temporary street course in downtown was not entirely ready for on-track activity, practice times for the ALMS team were shortened. With only having one full session before qualifying, the drivers of the #98 (PJ Jones and Rocky Moran, Jr.) and #99 (Bruno Junqueira and Ken Wilden) JaguarRSR XKRs got up to speed in no time. Junqueira and Jones were the qualifying drivers, putting them seventh and ninth on the GT grid.

"We had a promising start to the event," said Paul Gentilozzi, JaguarRSR Principal Partner. "Our qualifying results here at Baltimore marked our best starting positions this season. It also gave us a good indication on where we stand within the GT field - with a new track it leveled the playing field."

Knowing the Baltimore Grand Prix was going to be a crazy race, because that is what street racing is all about, it didn't take long for the first incident to happen - actually it was turn one on the first lap. A vast majority of cars from all classes piled up and unfortunately it was Jones, who took the green flag behind the wheel of the #98 car, that found himself stuck in the middle.

"He got hit from behind, got into the car in front of him which smashed the radiator and water lines," Gentilozzi continued in reference to what happened at the start of the race. "As he pulled away, he was unaware that it had dumped all of the water in the car and did terminal damage."