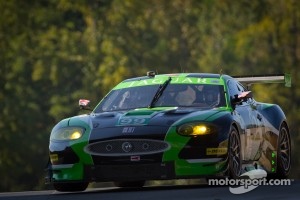 BRASELTON, Georgia (October 1, 2011) - JaguarRSR is proud of its efforts in the 14th annual running of the Petit Le Mans Powered by Mazda. After qualifying and taking the green flag in one of the biggest fields in the events history, the team finishes the season with significant performance gains and looks forward to a competitive 2012 season in the American Le Mans Series presented by Tequila Patron.

Rocky Moran, Jr. in the #98 Jaguar RSR took the green flag and immediately gained two spots, racing with teams from both Ferrari and Porsche he kept the leaders in sight until an incident on lap 26. Between turns six and seven the 98 Jaguar ran over a piece of metal debris lying on the racing line, the metal object came through the carbon fiber floor and lodged in the cars firewall. During its path it ruptured primary oil and electrical lines causing a brief oil fire and harness damage. After further inspection, the damage was too extensive to continue.

Bruno Junqueira started in the #99 car after qualifying 13th in class, his qualifying lap of 1:20.9 seconds is a gain of more than 2.2 seconds from RSR's 2010 qualifying. During his first stint, Junqueira brought the XKR to a fourth position on the race track, challenging leading BMW, Corvette and Ferrari teams, before coming in for a routine stop and driver change to Ken Wilden. While Wilden was working his run, the team had noticed a reduced fuel pressures on the telemetry systems. He was called to pit and have it investigated, but when the Canadian was in pit lane the vapor from the leak caught fire and damaged vital engine systems. The crew did an amazing job getting the repairs / clean up done so the car could return to the race for its many Jaguar fans in attendance.

Once the #99 car returned to the track with Wilden behind the wheel, the team wanted to do about 20 laps to get ahead of the Corvette who had also suffered early technical issues. At that point the team decided not to interfere with the fierce battle on track and chose to withdraw from the event.

Team managing partner Paul Gentilozzi offered the following perspectives, "We did not have the finish to the season that we wanted, we did however validate significant performance gains during the last seven events of the season. We leave the 2011 season with a dominate top-speed record in six of the last nine events, always being in the top three for top speeds, a fastest race lap record at Mosport and an average of 2+ seconds of qualifying and race pace performance. We started the season watching the race ahead of us, we are now fully engaged.

We have come a long way this season to giving the XKR on track credibility, in our first full season with two cars. This weekend the final results were not as desired, it is countered by our running with the leaders and race lap times well in advance of 2010, our qualifying time by over two seconds, and running fourth in the most competitive GT field this season. We take these gains to the off season and will be working very hard for a strong championship run in 2012."