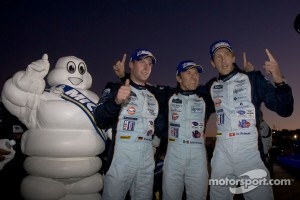 MONTEREY, CALIF. (September 17, 2011) – The official factory Aston Martin Racing team today became the latest team to claim victory in the MICHELIN® GREEN X® Challenge here today in the ModSpace American Le Mans Monterey. The overall winners of the six-hour race became the 17th different team and the 25th in 54 awards to combine victory on the track with a win in America’s premier environmental motorsports competition.

The victory was the sixth in MICHELIN GREEN X Challenge competition for Aston Martin and the first for the British factory based team.

“Speed and efficiency are the hallmarks of Aston Martin Racing performance and we are delighted to claim our first MICHELIN GREEN X Challenge,” said team principal George Howard-Chappell

Claiming its second MICHELIN GREEN X Challenge award and the third for Ferrari was the sole consolation for the Houston based Risi Competizione Ferrari team, which took the lead in the final three laps of the race only to lose fuel pressure and drop to third at the flag. The team then lost another two-spots due to a penalty for contact.

Perhaps the most impressive performance came from a car not eligible for race classification or MICHELIN GREEN X Challenge honors. The Porsche 911 GT3 R Hybrid 2.0 used its combination of a 465 horsepower engine and a flywheel hybrid linked to two 75 kilowatt wheel motors.

“Monterey is a perfect setting for the MICHELIN GREEN X Challenge, and also an appropriate venue for the Porsche Hybrid 2.0 to continue its development,” said Silvia Mammone, manager motorsports, Michelin North America. “The benefits of using motorsports to accelerate development of new technologies are real and of considerable benefit to everyone concerned, said Mammone.