The post-Le Mans celebrations ended today at the Northeast Grand Prix at Lime Rock Park, as Michelin technical partner teams finished second overall and second, third and fourth in the GT category in the third stop of the 2011 American Le Mans Series season. 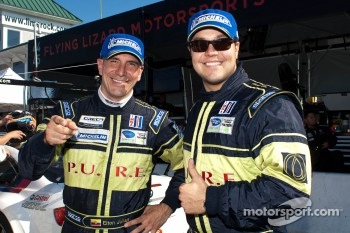 A valiant bid by the Flying Lizard Motorsports Porsche for a fifth consecutive Lime Rock GT class victory fell short, despite setting the fastest lap of the race and a new race lap record by five-time winner Joerg Bergmeister, as he and co-driver Patrick Long finished second in the rugged GT class.

The Le Mans GT-winning Corvette Racing team faced double trouble as both cars were effectively eliminated after being trapped in a multi-car tangle just 30 minutes into the two hour, 45-minute race on the 1.5-mile circuit.

“The Michelin tires are always excellent, actually we need to adjust the car a bit around the tires,” said Julian. “I took over the car just 51 minutes into the race and we were able to run very good lap times for nearly two hours and still save some tire in case of any late yellow caution flag, The Michelin tires are always consistent, never evil, and always a pleasure to drive,” said Elton.

“This was certainly not the day that we hoped or expected,” said Silvia Mammone motorsports manager, Michelin North America. “Our teams worked and raced very hard, but we didn’t make the top step of the podium today, so we will congratulate the winners and get ready for the next race at Mosport in two weeks,” said Mammone.