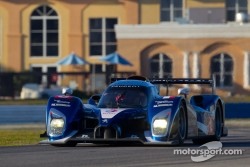 Peugeot picked up Monday where it left off last year with the fastest time in Monday’s opening test session for the 59th Mobil 1 Twelve Hours of Sebring presented by Fresh from Florida. One of the two new factory Peugeot 908s – driven by Franck Montagny, Stephane Sarrazin and Pedro Lamy – turned a best lap of 1:47.678 during the four-hour session in the lead-up to the opening round of the 2011 American Le Mans Series presented by Tequila Patrón.

The 2011-spec 908s are making their racing debut this week, and Peugeot enters as the defending Sebring race-winner. Things were incredibly close though with the top six cars within 0.629 seconds. The first of Audi Sport Team Joest’s Audi R15 prototypes sat second at 1:48.025; that was the car of reigning Le Mans 24 Hours champions Timo Bernhard, Romain Dumas and Mike Rockenfeller.

Next up was defending ALMS prototype champion Highcroft Racing and its new HPD ARX-01e of David Brabham, Simon Pagenaud and Marino Franchitti. It was the only non-diesel among the top five cars.

The GT battle was just as close with the first four cars within 0.519 seconds. The first of BMW Motorsport’s BMW M3 GT of Bill Auberlen, Augusto Farfus and Dirk Werner set a lap of 2:01.911 for a 0.152-second gap over the first of Flying Lizard Motorsports’ Porsche 911 GT3 RSRs; the lead one is driven by Jörg Bergmeister, Patrick Long and Marc Lieb.

Next up was the first of Corvette Racing’s two Corvette C6.Rs, a 2:01.909 for the car of Olivier Beretta, Tommy Milner and Antonio Garcia. It was just 0.172 seconds better than the second BMW entry.

Krohn Racing’s Ferrari F430 GT was the quickest of the GTE Am entries. Nic Jonsson, driving with Tracy Krohn and Michele Rugolo, set a lap of 2:03.217. The Krohn entry was 1.021 seconds clear of Larbre Competition’s Corvette C6.R of Julien Canal, Gabrielle Gardel and Patrick Bornhauser.

In LMP2, Signatech Nissan’s ORECA-Nissan of Franck Mailleux and Lucas Ordonez was quickest in class at 1:56.590. The car, making its first start, was 3.848 seconds ahead of Level 5 Motorsports’ new Lola-Honda coupe. Scott Tucker, Christophe Bouchut and Joao Barbosa are splitting duties.

CORE autosport’s two ORECA FLM09s were quickest in LMP Challenge in the team’s first weekend of ALMS competition. The first car of Ryan Dalziel, Jon Bennett and Frankie Montecalvo set the fastest time at 1:55.060, good enough for a 0.323-second cushion over the sister car of Gunnar Jeannette, Ricardo Gonzalez and Rudy Junco.

PR1/Mathiasen Motorsports’ entry of Ken Dobson, Ryan Lewis and Henri Richard was third in class at 1:56.195.