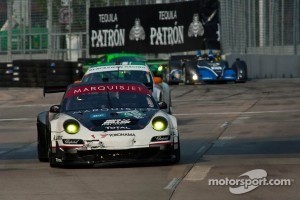 BALTIMORE, Md. (September 3, 2011) - The inaugural American Le Mans Series presented by Tequila Patrón Baltimore Grand Prix will be memorable for many participants for many different reasons, but few will have fonder memories than No. 48 Chopard/Marquis Jet/TOTAL/IPC Porsche 911 GT3 RSR co-drivers Bryce Miller and Sascha Maassen and the entire Paul Miller Racing team.

Miller and Maassen had their best run of the season in their Yokohama-shod Porsche with a fourth-place result in an ultra-competitive GT class after two tough hours of racing.

"We're all ecstatic," said team owner Paul Miller. "This is just a perfect day for us. Everything clicked our way. We just didn't make any mistakes. We had great pace from Bryce early on and then Sascha got in and kept that position. The Yokohamas were awesome today and we really appreciate the support of Chopard, TOTAL, IPC and Marquis Jet. It's a great day for us. It's just as good as a win from my point of view."

While the ending couldn't have been much better for the team, the start of the race could have been disastrous. After Bryce Miller took the green flag from eighth on the starting grid - which matched the team's previous best starting spot at Long Beach in April - Miller got caught in the middle of a multi-car pile up when two cars tangled a few spots ahead of him going into the first turn.

"The first corner on the green-flag lap, there was an accident with a Porsche and a BMW," Bryce explained. "I got kind of a Jaguar/BMW sandwich."

However, after what "felt like an eternity" to Paul Miller, Bryce was able to continue with no significant damage and still in good position. For the remainder of his stint, Bryce gained positions - as he has done for most of the season - and when he pitted under caution near the halfway point to hand over the controls to Maassen, he did it from fifth place.

The team was clearly happy to be running inside the top five, but it did not come as a surprise. They came into the weekend believing they had the right combination to be successful based on past performance.

"We kind of knew that this was our moment for the tire that we have," said Bryce. "Going back to Long Beach, we had such good performance there. The Yokohama excels in this type of environment, so we knew this was a good chance for us."

Maassen also has a knack for running well on street circuits and rejoined the fight in fifth place. Both Bryce and Paul Miller, described the final hour of the race as being a nail-biter, however, as Maassen withstood heavy pressure from Jaime Melo in the No. 62 Ferrari, which won the previous ALMS event at Road America.

The German proved he was more than equal to the task. Not only did he keep the Ferrari and a charging No. 55 BMW behind him, he managed to move up one spot to fourth place, where the No. 48 Porsche would finish.

"First, I have to thank Bryce," Maassen said. "He did a great job. Again, and this has been happening now for a few races, we had a flawless race. We didn't do any mistakes. This was the key to our success in the last races and this was the key to our success here. There are so many chances to make mistakes and we didn't do any, not in strategy, not in driving, nowhere.

"I had the whole time the red Ferrari in my mirror. I knew he was tough and to keep him behind me, I did everything that was legal and a little bit more to try and keep him behind me. It was a great job of all of us. I'm really, really happy for the team. We expected to do well here on the street circuit, because it suits our car and our tire, but we didn't expect to finish fourth."

It was the fifth straight top-10 result for the team, which is continuing to build momentum in its first year competing in the ALMS GT class.

"We've got all our young talent and they're just really hitting all the marks every time out," said Bryce. "I'm just really proud of all the guys. This is a full team contribution, from the performance to the preparation to the pit stops to the tires.

"Everything that had to be executed today to give us the best possible run was executed, so hats off to everyone. It's just awesome. The guys destroyed it again. In their pit stops, they were just killing it. It's a great feeling."