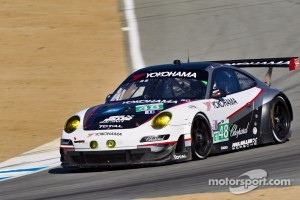 Maassen got a good jump at the race start in the No. 48 Chopard/Yokohama/IPC/Total Porsche 911 GT3 RSR and gained two positions. At that point, it looked like the team had found the right car set-up and looked poised to keep the forward momentum going. Maassen pushed hard throughout his first stint and pitted on lap 49. He came in for a driver change, four new Yokohama tires and fuel.

At that point, Miller got in the No. 48 Porsche and was ninth when his stint began. Miller demonstrated excellent pace as he ran lap times within half a second of the GT race leaders. Miller’s quick lap times kept him in the top-10 throughout his first stint and into the early stages of his second stint.

Three laps into Miller’s second stint, he had to pit again. This time the car needed to have the left rear hub fixed. The team worked diligently to fix the mechanical issue. By the time the team made the necessary repairs, the car was 11 laps back from the GT leader.

Undaunted by the mechanical issue, Miller persevered and again showed excellent pace throughout his double stint to keep the car in the top-10. On lap 168, Miller made a scheduled pit stop and handed the No. 48 Yokohoma-shod Porsche back over to Maassen.

Much like Miller, Maassen did not waste any time getting up to speed during his second stint. Now more than four hours into the race, the Yokohamas continued to show just how good they are. Both Miller and Maassen enjoyed considerably improved lap times as the race wore on.

With a little less than an hour remaining in the six-hour event, Maassen’s day was done on lap 196. That’s when he made his final pit stop and Miller got behind the wheel for his final stint. Miller drove the final hour and brought home a solid top-10 finish.

“I had a very good start,” Maassen said. “I overtook two cars. The car felt really good in the beginning. But, it was the first time we drove in the heat [this weekend] because we started later in the day. We were doing well. Then, we had an unfortunate problem in the left rear. We were lucky that other cars had trouble too. We were able, through the long race, to make up the lost position and finish in the top-10.”

“Even with the mechanical [issue], we still proved that we can finish in the top-10 and that we have consistent reliability,” Miller said. “Today’s finish was a great complement to the team and they should feel proud of the result. If it wasn’t for the mechanical, I think we would have had a top-five result.

“I really enjoyed this car’s setup quite a bit. It was really manageable for me. It’s just indicative of the progress that we’ve been making both with Yokohama and our own team. We just need to keep doing what we’re doing and stay focused. I think, as we go to Petit [Le Mans] with all this momentum, it’s a good way to close out the year.”

“I am really impressed with how Bryce and Sascha drove today,” team owner Paul Miller said. “The team did an excellent job and gave these guys a very good car to drive. I can’t say enough about how the Yokohama tires performed. It was great to see us running lap times that were not too far off from the GT leaders. This just shows that our tire development program is getting results. This year, we’ve made great strides in this area and I couldn’t be happier with Yokohama.”