Paul Miller Racing set for the streets of Baltimore

Miller and Maassen Set to Attack Streets Near Baltimore's Inner Harbor
No. 48 Paul Miller Racing Porsche Teammates Like Their Chances in Inaugural Event 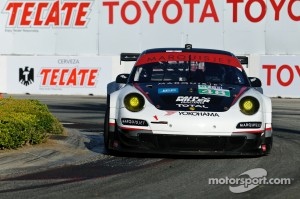 PARSIPPANY, N.J. (August 31, 2011) - With momentum from four consecutive top-10 finishes on their side and the fact that they led the last American Le Mans Series presented by Tequila Patrón street race, co-drivers Bryce Miller and Sascha Maassen have high hopes for their No. 48 Chopard/Marquis Jet/TOTAL/IPC Porsche 911 GT3 RSR from Paul Miller Racing heading into Saturday's inaugural Baltimore Grand Prix.

The two-hour sprint race will be held on a two-mile, 12-turn street circuit in Downtown Baltimore. While no racecars have yet turned laps in anger around the temporary circuit, initial reviews on the circuit's layout have been enthusiastic, what with its location adjacent to Baltimore's Inner Harbor, several nearby hotels, bars and restaurants and Camden Yards - home to Major League Baseball's Baltimore Orioles - literally inside the temporary racetrack.

Those landmarks should make great backdrops for photography and those establishments are certainly convenient, but Miller and Maassen are most excited by the notion that this street circuit should play to the strengths of their Yokohama-shod Porsche. In the season's lone previous street event at Long Beach in April, Maassen had the No. 48 Porsche at the head of the GT field for the first time this season before surrendering the lead when he pitted to hand the car off to Miller.

"Our last street race at Long Beach was promising as we led a couple laps so I'm looking forward to this weekend," Miller said. "We have a lot of momentum going into Baltimore. The team is hitting all their marks during their pit stops, our top speeds are improving, pit strategy has done us well, and Yokohama continues to deliver newly improved tires."

Maassen went a step further in pointing out that the Yokohamas may have benefited the team at Long Beach. If that's the case - and if they can avoid incidents, which is always a concern on a concrete barrier-lined street course - Saturday could be a really good day for Paul Miller Racing.

"I've always liked street circuits," said Maassen. "Since we were leading the Long Beach race, I am looking forward to this event, as I think we will have our best chance of doing well. I think it is an advantage for a new team, because the more established teams have no advantage, as the track is new to everyone. I always learn new tracks quickly and the Yokohama tires were perhaps even an advantage in Long Beach..."

Guy Cosmo heads to the streets of Baltimore