After missing the podium at the first two American Le Mans Series races in 2011, defending GT champions Joerg Bergmeister (Germany) and Patrick Long (USA) realized that the Northeast Grand Prix at Lime Rock was the place where their season needed to turn around. 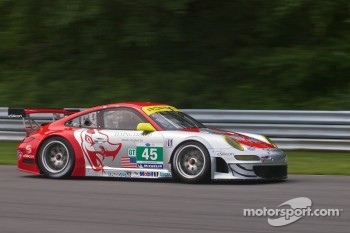 After qualifying their Flying Lizard Motorsports Porsche 911 GT3 RSR third on the grid, Patrick Long jumped into second place right away at the start, and he and Joerg ran a solid race to contend for the victory before a late-lap puncture took them out of the hunt for the win. Still, second-place points were just what the doctor ordered, according to Long.

“This is an important finish for us – the best one of the year. Except for the winning BMW, we made up points on everyone in the standings in front of us. We had a great set-up and a winning strategy, but the puncture left us out of the running for a victory in the end,” said Long, who moves into third place in the points, and, along with Bergmeister, only three points out of second.

Bergmeister, who had a Lime Rock winning streak on the line, was pleased with the way the car performed, but the puncture took the wind out of their sails.

“This was a very busy race, and we were able to compete for the lead almost until the end, when we had bad luck with the late-race puncture. I tried everything to score my sixth straight win, but it didn’t work out today. I think we scored the best result under the circumstances.

The Falken Tire Porsche 911 GT3 RSR was also headed for a podium finish, but was slowed near the end of the race by fuel pressure ills, which led a 90-second penalty for contact on the course when the car was trying to limp to the finish. The penalty pushed the Wolf Henzler (Germany)/Bryan Sellers (USA) race car to fifth place. Still, Henzler noted the team competed with the winning BMW and the Flying Lizard Porsche for most of the race.

“We are pleased for the Falken Tire Porsche team to be competitive with the GT leaders, and only a late fuel pressure problem prevented us from finishing on the podium. We had a good strategy, and felt we could run with the leaders before our problem,” said Henzler.

Marco Holzer (Germany), the other Porsche factory driver at the event, was sharing the other Flying Lizard Porsche with team owner Seth Neiman, and experienced his first event at Lime Rock.

“I jumped in the car far down in the class, and was able to finish seventh and turn competitive lap times at a new track for me. I thank the Flying Lizards for giving me this opportunity,” said Holzer.

Finishing just in front of Holzer/Neiman in sixth place was the Paul Miller Racing Marquis Jet Porsche 911 GT3 RSR driven by Bryce Miller (USA) and Sascha Maassen (Germany). Maassen/Miller were advancing through the field before being slowed by an exhaust issue.

In the GT manufacturers points race, Porsche is now in second place, passing Corvette with today’s results, with its sights on first place BMW.

In the American Le Mans GT Challenge class for matched Porsche 911 GT3 Cup cars, Dion von Moltke/Mike Piera took their TRG Porsche 911 GT3 Cup to victory with a last-lap pass of TRG Porsche teammates Spencer Pumpelly/Duncan Ende to score their first ALMS win. The Battery Tender Bill Sweedler/Butch Leitzinger Porsche and the Black Swan Tim Pappas Damien Swan Porsche rounded out the top four – with all the teams having a shot at the win near the end.

“We had a winning strategy which gave us fresher tires in the end, and I was able to get by my teammate Spencer Pumpelly on the last lap when he was stuck in traffic behind a slowing GT car. It was bad luck for Spencer, but we were able to bring the TRG Porsche to victory. With Spencer and Duncan Ende finishing second, it was a one-two TRG finish, the team’s best ever in ALMS,” said von Moltke.