“Stepping up to ALMS is certainly a big jump, but I feel the team is more than ready, so this is just the calm before the storm,” said Hansson, a native of Denmark who now lives in Chicago. “I am excited to get going!”

The move to the top-tier ALMS division comes after some recent success by PNR and Hansson in the team’s last two rounds of the IMSA GT3 Cup Challenge by Yokohama. They finished third in their most recent race at Lime Rock Park last month, the team’s first career podium showing, in addition to an eighth place result earlier that same day in the first race of Lime Rock’s doubleheader event. In the team’s race prior to Lime Rock, PNR and Hansson finished fourth at Miller Motorsports in early May.

“I haven't actually raced at Road America, only done track days,” Hansson said. “But Road America isn't exactly a complicated track, just one that requires a sizable set of cojones. I'll be doing a bunch more virtual practice in Forza Motorsports and watch some more videos.”

Although he will co-drive with Hansson for the first time, Farnbacher, who is from Germany, is well familiar with Road America’s legendary four-mile road course in Elkhart Lake, Wisconsin.

“Road America is a great track,” Farnbacher said. “It is a very fast rollercoaster through the Wisconsin forests, it reminds me a lot of the old Nürburgring, but the runoff is good and the safety standards are high. The last time I drove there was with the Panoz Esperante in 2009. We finished fourth in a very competitive championship.”

While Farnbacher will meet Hansson for the first time just this week, he is well familiar with the PNR operation and confident in the team’s ability.

“I think David and I will have a good shot,” Farnbacher said. “I will try to work hard with my co-driver and give him everything I know and the goal, of course, is the top spot. Our competitors are very strong, but we don't have to hide with our good crew and team and we can hold our own among the talented drivers.” 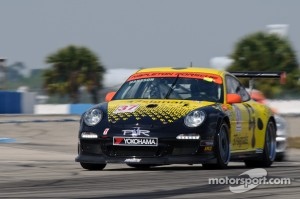 Farnbacher scored multiple victories and finished second in the 2008 ALMS GT2 championship racing a Porsche, and was also on the pole for this year’s Rolex 24 At Daytona in a GT3.

Although Road America is the task at hand, Hansson and PNR are also planning on running additional ALMS races this year, including the season-ending Petit Le Mans at Road Atlanta.