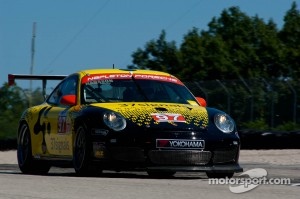 Farnbacher posted a top qualifying lap of 2:15.826 (107.290 mph) Friday on the monstrous four-mile track and the No. 97 team will start ninth in the Grand Touring Challenge (GTC) class in tomorrow’s Time Warner Cable Road Race Showcase four-hour race. Hansson and PNR are making their ALMS debuts while Farnbacher is co-driving with his new teammate for the first time.

The team has worked through setup and brake issues and plans to take a back-to-basics approach in preparation for tomorrow’s race. Considering the wealth of experience held by the team personnel, Hansson is hopeful they will contend in the No. 97 PNR/37signals Porsche GT3.

“We’ll go back to basics and hope that a basic setup, which will be a little slower than a perfect pro setup, is what’s going to win it,” Hansson said. “It’s a long race, so even if we are a couple tenths of a second off by not having the most sophisticated setup, at least we’ll be in the race.”

Hansson has never competed on the 14-turn road Road America road course and didn’t get any seat time during Thursday’s opening practice session as the team worked through some first-day issues with Farnbacher at the wheel. Hansson got into a groove during his debut Friday stints and said he enjoyed the flow and challenges Road America presents.

“I feel like I can go in deep into the corners and out brake people,” Hansson said. “I like the fast, sweeping turns. This track hits all the marks and it’s a great track for me.”

German sports car racing specialist Farnbacher set a top lap time of 2:07.958 (113.887 mph) at Road America in 2008 in a season that saw him score multiple victories and finish second in the 2008 ALMS GT2 championship. After compiling some good data in Friday practice, Farnbacher aimed to put the No. 97 PNR/37signals Porsche GT3 among the top five cars in qualifying only to have technical issues put that goal out of reach.

“We were sort of positive going into qualifying, but something technical broke on the car and ruined the whole setup,” Farnbacher said. “At the end we couldn’t do it, the car was too far off, but we can’t put our heads in the sand. We have to keep working hard and make some radical changes. We really hope to bring the car back to performance.”

Hansson, Farnbacher and PNR will have a final shot at working on the No. 97’s setup in race-morning warm-up Saturday at 10:15 a.m. The featured four hour ALMS race starts Saturday afternoon at 3 p.m.

“We’re going to have to do something drastic for tomorrow, and hope that we can throw something at the wind and it sticks, because we don’t have any time to test it,” Hansson said. “What we’re going to do is return the car to basics, run as basic a setup as we possibly can. At this point, it’s not about eking out tenths of a second, it’s about being competitive on race day.”