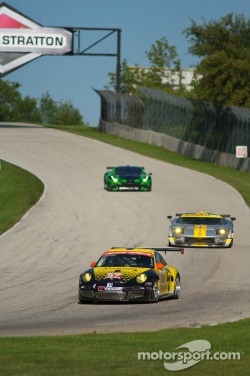 Farnbacher moved the No. 97 PNR/37signals Porsche to as high as second-place in the middle part of the race before Hansson returned to the car for a solid stint in the final run to the checkered flag. It was the first ever ALMS race for both PNR and Hansson and all on the team improved steadily over the course of the weekend.

“We had quite the roller-coaster ride,” Hansson said. “It was definitely fun being out there and a great experience. Given the amount of trouble we’ve had, it’s hard to wish for anything better than getting the car all the way up to second."

Hansson started the No. 97 and recovered from a trip off course in the Turn 6 Carousel early in the four-hour race. He was able to get back on track and to the pits where the PNR crew quickly attended to front-end repairs before Farnbacher later took over just under 90 minutes into the race.

Farnbacher, a top sports car talent from Germany, made his charge up to second only to have to pit for repairs and to replace the front and rear sway bars. Hansson assumed control of the car for the final stint and crossed the finish line for a solid result in his debut performance.

“Overall, the car, actually, was pretty good.” Farnbacher said. “If the suspension problems wouldn’t have occurred, we would have been in a good spot. When David did the last stint, he did a really good job. He was one second behind the pros, and he did a phenomenal job.”

“Dominik did an absolute phenomenal job driving the car,” Hansson said. “I picked up a ton just knowing his markers and knowing how deep you could go into the corners. We never have driven the car as hard as it was driven today.”

Both Hansson and Farnbacher went out of their way to commend PNR team personnel for the extra hours and effort before and during the race.

“Everything today with the team and crew was on the money,” Hansson said. “We won positions during pit stops and the car got out again even though the control arm broke. The adjustments that got made to the stock setup in the middle of things really improved it. It’s reassuring to know that we could get the car that fast, and that I could get that close to what the pace needs to be.”

“I think we found a good package, and when we come back next year at this race track, we have something to work with,” Farnbacher said. “When David goes to the next race, he will have a good base for the setup. There was good communication. Nobody was running away because things didn’t work well. We stuck together, we talked, tried to sort out the problems, figured it out, changed it, and it worked.”