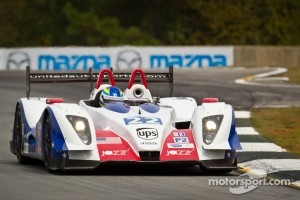 At just 2.54 miles long and with 58 cars on track, traffic has been the key to everybody’s lap times. And with five classes of car with varying speeds, managing traffic has been imperative in maximising a consistent lap time.

But for qualifying, LMP1 and LMP2 cars got a 15-minute session to themselves. However, 18 cars still circulated which didn’t completely eliminate the traffic factor.

Johansson set at early best time of 1:15.367 on lap five and held third position but despite going quicker again a lap later, he was bumped down to fifth. A further improvement on his times on lap ten would be his best but unfortunately, not by enough to move up the order.

It can be said though that qualifying is a ‘formality’ in endurance racing and with incidents aplenty in the days leading up to today, the upcoming 1000-mile / ten-hour event could all come down to attrition.

Whilst Brown and Johansson had already sampled the earlier in the year, Sunday gave Patterson his first Le Mans Prototype experience

His quick adaption to the aerodynamic, Formula One-comparable car was evident with Patterson being the fastest driver for United Autosports in three of the four practice sessions. Team Chairman and Co-owner Zak Brown was the quickest in practice session 2

Stefan Johansson sat out most of the practice sessions having already had good seat time in the car in testing including being the sole runner on Wednesday. He did, however, run in the two-hour night practice session last night and this morning’s one-hour session, but got cut short by the morning’s third accident to bring out the red flags.

Working in partnership with French race outfit DAMS motorsport, the team provided a faultless car enabling the drivers to get maximum time in the car leading up to tomorrow’s race. Only contact for Brown with a GT car ten minutes before the end of practice 2 forced an earlier-than-planned return to pit road with a damaged rear splitter.

“We got back into the swing of things pretty quickly at the start of the week and I think we have a pretty good race pace. There’s over fifty cars on the track so it’s not about ultimate pace that wins this race – it’s about not hitting someone, or getting hit.

“You ultimately want to go as fast as possible, but we haven’t been spending any time worrying about qualifying. We just want to make sure we have a good race car that all three drivers are comfortable with and I think we’ve got that.”

“It was a little daunting at first, to get your head up and think ‘wow I can actually drive this thing at speed’ but it took about two laps before totally falling in love with this machine.

“Our times have all been quite close but the one constant thing between day and night [driving] is with 58 cars on a 4km track, it’s absolutely chaotic. You can’t look at lap times as to who’s quickest because it’s a matter of fortune. If you encounter traffic on the back straight, it’s a lot different to being behind 6 cars in the ‘Esses’ where you literally have to glide through there and lose five or six seconds verses half a second. Patience is going to win this race; not speed.”

“We’re a little bit stumped as to what happened in qualifying. It seems we’re losing speed in all of the accelerating parts so the team are just checking things over.

“We just have to keep our nose clean in the race and see what happens. I still think we have a shot at the podium in LMP2 and that is still our goal.”