Following the public unveiling of Acura's all-new ARX-02a last month at the American Le Mans Series Sebring Winter Test, the spotlight turned to Audi and its new R15 TDI racer. The German automaker, though, had been keeping its next-generation ...

Following the public unveiling of Acura's all-new ARX-02a last month at the American Le Mans Series Sebring Winter Test, the spotlight turned to Audi and its new R15 TDI racer. The German automaker, though, had been keeping its next-generation diesel-powered prototype on close guard, as the LMP1 machine had been put through its paces in southern Europe. 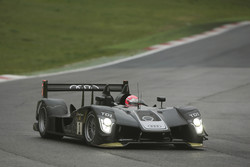 It didn't take too long for spy spots of the new car to be published, the first batch coming from Italian motorsport magazine Sport Auto and British weekly, Autosport. With the public already getting their first glimpse of the revolutionary new prototype, Audi then released an official photo of its own (left), which was taken at a recent test at Vallelunga in Italy.

While official details of the R15 TDI are not expected to be released until the car's official unveiling at Sebring International Raceway next month, it's clear Audi has once again taken a new leap in the design of a modern-day Le Mans prototype.

The car features a raised front nose design, with repositioned front radiators likely due to the higher profile. At first glance, the R15 TDI almost has a similar front-end design to WR's LMP2 racer from years past.

A low-profile design on the sides of the diesel-powered prototype makes the rear wheels protrude, while the 2009-spec rear wing has similar profile to Acura's, which are both mounted the same way.

It's unclear whether Audi has followed Acura in using full-size tires on all four corners of the car, but if it did, the call to go that route would have to be made in the early design stages last year.

Audi will debut the R15 TDI at next month's Twelve Hours of Sebring, using the ALMS season-opening round as a dress rehearsal for its primary objective, the 24 Hours of Le Mans in June.

"So far the R15 TDI has performed as we expected," explains Head of Audi Motorsport Dr. Wolfgang Ullrich. "Now it must also prove itself in race conditions. Sebring is a particularly hard race and is therefore perfectly suited to reveal even the smallest of weaknesses."

Both cars will face fierce competition from Acura and Peugeot, which come to Sebring with equally impressive driver lineups. All three will surely have the speed, but could the new Audi and Acura prototypes also have the reliability needed to conquer the the bumpy and unforgiving Florida airfield circuit?