The result dropped Dirk Müller from the lead to a three-way tie for second place in the driver’s championship. 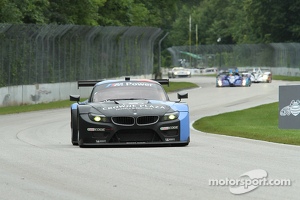 Bill Auberlen and Maxime Martin finished seventh in the No. 55 Z4 GTE after starting from the seventh grid position. John Edwards and Dirk Müller started from the ninth spot and finished eighth in the No. 56 machine. The result dropped Müller from the lead to a three-way tie for second place in the driver’s championship.

Today’s finish was disappointing for BMW Team RLL following fifth and sixth place finishes in the last round at Canadian Tire Motorsport Park (formally Mosport) and having won the GT class at Road America in three of the previous four ALMS seasons.

“We made a particularly good call to get the No. 56 on dry tires as soon as we could,” said Bobby Rahal, Team Principal. “It gained us the lead, but as the track dried and the speeds picked up, great strategy was no substitute for a 10 kph top speed disadvantage. As much as Road America is my favorite racetrack, I’m looking forward to tracks with shorter straights.”

“Yesterday we saw BMW teams in close battles with our competitors within the different GRAND-AM fields,” said Gordon McDonnell, BMWNA Motorsport Manager. “Unfortunately, today, just as we saw in Canada, BMW Team RLL struggled to keep up with the competition. It is particularly difficult to again face a result so short of our team’s potential, given our horsepower deficit to the rest of the GT field.”

Round Seven of the 2013 ALMS season, the 2.45-hour Baltimore Grand Prix will be held on Saturday, August 31th in the city streets of Baltimore, Maryland. The race will be broadcast on ABC television at 12:00 p.m. ET on Sunday, Sept. 1.

MacNeil and Bleekemolen finish 2nd in GTC at Road America