Woodcliff Lake, N.J. – August 3, 2012… Jörg Müller qualified the No. 55 BMW Team RLL M3 GT on the class pole for tomorrow’s Mid-Ohio Sports Car Challenge. His time of 1:19.298 minutes around the 2.25-mile, 13-turn road course bested the competitive 12-car GT field in a 15-minute qualifying session that saw the first eight cars in the class post times less than one second off Müller’s pole time. Müller will co-drive with Bill Auberlen. Auberlen scored the first pole of the season for the No. 55 M3 GT at Lime Rock Park on July 6. 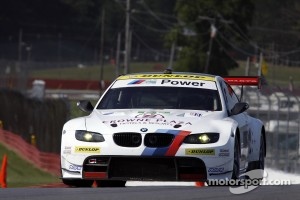 Only .456 seconds off the pole, Joey Hand qualified the No. 56 M3 GT in the seventh starting position with a time of 1:19.754 minutes. Hand will co-drive with Dirk Müller.

“I am very pleased for Jörg and Bill,” said Bobby Rahal, Team Principal. “They have been our hard luck pair this year. I felt bad for Joey. He was not too happy with his car, but he is not that far off. We tested here a month ago and hopefully that will benefit us tomorrow when it counts.”

Following a streak of three consecutive podium finishes in the first three races of the season, including a win at the 12 Hours of Sebring, BMW Team RLL had two difficult races at Lime Rock Park and Mosport. Only fifth and sixth place finishes were netted at Lime Rock Park and the post race disqualification of the winner gave the team a third and seventh place finish at Mosport. Trailing Chevrolet by 13 points in Manufacturer standings and 18 points behind in the Team standings, BMW Team RLL is looking for a strong result at Mid-Ohio to move closer to the top. Joey Hand and Dirk Müller stand third in driver points. Teammates Bill Auberlen and Jörg Müller stand sixth.

Jörg Müller, driver No. 55 M3 GT – “Our championship is so tough and so close - especially at the top of the GT class - that we needed to have everything perfect for this one lap. I am very happy. The crew did a brilliant job and our Dunlop tires were fantastic. The qualifying position is important but the race result is the most important. We have had the pole before let’s see what happens. The car needs to be consistent for the duration of the race. I am confident we will have the speed.”

Joey Hand, driver No. 56 M3 GT – “From practice to qualifying we had an entirely different car. Something changed and we are going to look into it. For now I’m confused. It was very loose. Our other car is on the pole so it’s a matter of figuring what changed. We will fix it and fight our way back to the front.”