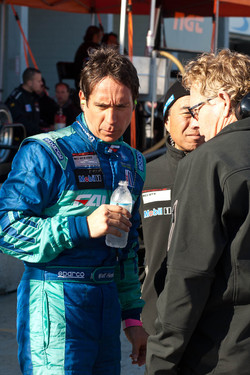 SEBRING, FL, March 14, 2011 - Bryan Sellers has raced for 24 Hours at Le Mans, 1000 miles at Petit Le Mans and has won open wheel championships and countless races. He has been a factory driver for Team Falken Tire for three seasons and is considered among the elite "young guns" of the sport. It has all pointed him towards Saturday's 59th Annual Mobil 1 Twelve Hours of Sebring presented by Fresh from Florida. The Braselton, GA-resident is eager to put his skill and experience against the greatest field of GT class competitors and equipment ever assembled not only at Sebring International Raceway but also anywhere in the world. Despite the intense competition, Sellers, who will share the No. 017 Team Falken Tire Porsche 911 GT3 RSR with Wolf Henzler (Germany) and Martin Ragginger (Austria) at the March 19th American Le Mans Series presented by Tequila Patrón 2011 season-opener, enjoys his best-career opportunity for victory.

The 3.7-mile, 17-turn Sebring facility has played host to legendary events over its nearly six decades of competition. However, with the season debut of the Intercontinental Le Mans Cup (ILMC) joining with the ALMS opener, the 2011 field combines the best of North America and the world into the strongest battle in GT racing history. The 19-car GT field is the largest category of the 57 entries across the six classes.

Sellers has been raced at the front numerous times in GT but 2011 promises the best opportunity to showcase his talents in production-based cars. Entering the 10:30 AM (ET) start, he has done all he can to get a leg up on his competition. Beyond four days of Sebring testing and an intensive physical training regime over the winter, Sellers has also raced three times since January scoring an impressive second-place finish in the GT class of the Rolex 24 At Daytona (FL).

With Thursday's first official practice, the Falken Tire factory effort will be competing against "works" programs from Porsche, Ferrari, BMW and multiple manufacturer-supported privateer efforts as well as other factory tire operations. Having led here at Sebring in 2010, Sellers and his team know how to be quick on the dauntingly quick runways and taxiways of this World War II bomber airfield. With the ongoing development of the Falken racing slick, the team pushed towards the front throughout winter testing on outright speed. Even more promising is the strength the Falken engineers have found across the full life of the tire. The combination of experience, a Derrick Walker-prepared crew and Porsche's newest 911, all point towards Sellers adding an ALMS victory to his already notable resume... no matter how legendary the competition.

About competing in the 59th 12 Hours of Sebring: "This is one of the greatest years in the history of Sebring. It's an honor to be a part of something so special. The competition in GT is probably the stiffest of any competition in any form of motorsports so to make your mark in ALMS, as well at the 12 Hour, would be huge. The Porsche and Falken tires performed well at the test and, although we still must improve, I believe we are in a good place to start the season."

About his approach to the 12 Hours: "Over the years the cars and preparation have become so good that the endurance races have turned into a long-distance sprints. It places a premium on overall speed and consistency. A podium has become increasingly more difficult over the years but I think one thing has remained the same: patience. No matter what happens you must keep your cool and persevere. It's a long race and as quickly as a lap gets away from you it can come back."

About his expectations for the race: "Leading into this race, I feel like it is the best opportunity I have ever had to win. I have a great group of people that I am working with this week starting with my co-drivers Wolf [Henzler] and Martin [Ragginger]. Team Falken Tire Walker Racing has done a great job providing us with tires and prepping the car. I wait all winter for this race so, needless to say, I am very excited."