Damp conditions made for an exciting qualifying session this afternoon, as the American Le Mans Series prepares for tomorrow’s Northeast Grand Prix at Lime Rock Park.

Despite a spin during the session, Chris Dyson (Dyson Racing #16 Mazda/Lola B09 86) took the overall pole with a fast lap of 45.708. Dyson’s fast lap edged teammate Steven Kane’s #20, with the Muscle Milk/AMR Lola B08 62 of Klaus Graf qualifying third. 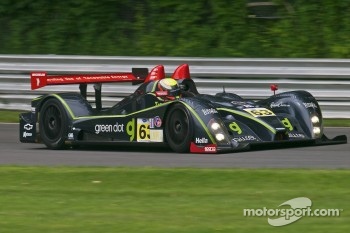 Following his pole-winning run, Dyson was ecstatic – “It’s great to be here at our home race. We have a lot of friends and family here who are cheering us on. So you don’t want to send them home disappointed. I was impressed with both Steven Kane and Humaid Al Masaood (#20-LMP1 Lola B09/86 Mazda), and Steven really showed a lot in qualifying. It’s a credit to the guys on our side to give them such a good car.”

Elton Julian (#63 Oreca FLM09) led the pace in LMPC with a 48.105 lap time, beating out Gunnar Jeanette by .39 seconds, with Kyle Marcelli third. “By the time we got out, the track was pretty dry,” Julian said “The car was balanced and comfortable, and that’s what we needed. Good job by the Genoa team.”

The GT pole was won by Joey Hand, piloting the #56-GT BMW M3 with a lap time of 50.925. "Following Le Mans it was right back to testing at Road Atlanta with BMW Team RLL. Heading to Lime Rock we can put into play all we learned at Atlanta with the tires and new set-ups… I was pretty confident with the setup in the dry. The Dunlop tires have been very good. From a driver’s standpoint, that’s what you’re looking for – balance and good tires. You give me that combination and I’ll go pretty fast.” Hand’s teammate Dirk Werner Hand’s teammate Dirk Werner was second in GT, with a lap time of 51.179." 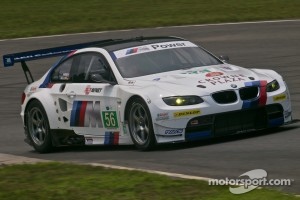 In GTC, series newcomer Jaap van Lagen was fastest with a 54.982. van Lagen remarked after his run, “it’s very narrow and short here and it will not be easy. It won’t be a big problem. I’m really impressed with the event and the circuit. Hopefully I can do a good job here.”

In this morning’s practice session, Toni Vilander’s #62 Ferrari F458 Italia was involved in heavy contact with the #55 BMW M3 GT of Bill Auberlen in turn 4, sending both cars into the grass. While Auberlen’s BMW continued with minor damage to the right front, the Ferrari tagged the fence and suffered more substantial damage. The #62 Ferrari will start Saturday’s race from the rear of the grid.