Already crowned American Le Mans Series champion in 2011 in P2, Christophe Bouchut secured himself another title in the American championship alongside owner/teammate Scott Tucker, with hard fought battles at each race this year. The Level 5 Motorsports duo competed all season long against drivers Heinemeier-Hansson/Plowman in the Morgan LMP2 of Conquest Endurance with the high point coming after an overall victory in the streets of Baltimore in their HPD ARX-03b. It was therefore a very eventful season for Christophe Bouchut, running with Level 5 Motorsports. Although Bouchut/Tucker took the title honors, it all come down to the last meeting, at Road Atlanta. It's the second consecutive championship for the Burgundy-based driver, who also saw his team be selected for the 2013 Le Mans 24 Hours.

Laurent Mercier: It would be hard to imagine a better season, no? Christophe Bouchut: "It was a superb year, even if it was difficult. Few teams are like Level 5 Motorsports because the effort and money invested is quite important and we battled against a team that was making its debut in endurance racing with a brand new car. Basically, the complete opposite of Level 5…It would have been disappointing to lose the championship. We fought all season long and I enjoyed it very much. The American rules are different, notably in terms of the points system. The gap between first and second is not much. In Europe, we would have been champs by mid-season. Level 5 Motorsports won 8 of 10 races but we had to wait until the last race to crown a champion. It's good because that keeps the suspense going until the last moment. Of course, it adds stress to the teams, but Conquest Endurance did a fantastic job, even if we ended up stronger."

It was a superb year, even if it was difficult.

The overall win at Baltimore will remain a big moment for you? "The track reminds me of Macau. The event had a pretty bad start because of a dangerous part of the course in the straightaway. We were on another planet with cars that were taking off in that part of the track. You had to stay vigilant and the right setup was impossible to find. No suspension could take that kind of shock. Not for one second did we think we could win the race. I pulled out the pole position in the last lap while the Morgan/Conquest was really fast on that circuit. In reality, the win was almost easier to get than the pole. It's extraordinary to have won that race. David Heinemeier-Hansson was really fast in the first hour and was able to create a gap to Scott (Tucker). I had to push hard to catch Martin Plowman. A safety car period regrouped everyone together, and then the Morgan had a problem. Even without that, we had the performance to take the win."

In your mind, has Scott Tucker has turned a corner this year? "Absolutely! He reached another dimension this year. At Mosport, he had the fastest P2 time. He's showing that he's reached an exceptional level. No Gentleman driver I've seen before has done what he's doing. In practice, there are times that we are on track together and I have to admit that sometimes I have trouble following him with cold tires in the first two or three laps. He doesn't have the experience of a professional driver but his performances are stunning. That was the case at Mosport in turn 2, which is a blind corner. He's able to go through full throttle, which I'm unable to do, I don't know how he did it. Luis Diaz doesn't go through there at full throttle either, but Scott can. At Baltimore, where you get closer to the wall, the gap is more, and there I'm able to take over." 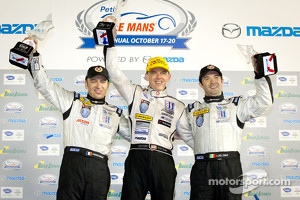 What are your projects and those of Level 5 Motorsports for 2013? "For now, Level 5 hasn't announced anything. I think news will come during the month of December. It's a huge relief for the team knowing that they will be able to go to Le Mans because the P2 title doesn't guarantee an invitation. The team would have been disappointed. It's difficult for the American teams to go to Le Mans. There are the Lizards, Krohn Racing, Corvette Racing and Level 5 Motorsports."

You wish to continue with Scott and Level 5? "To find better than Level 5 Motorsports would be difficult. It's been more than four years since I've been with the team. Through the years, it's become more than a team and a bit of a second family at the track. I don't wish to do a double program like in the past. Driving in the USA gives me a lot of work and a lot of travel. My schedule is busy and I must also think about my family. I rarely have time to sit down and read a book. Of course, there are other series, like the Sprint Series or the World Endurance Championship. It's true that driving in the FIA-WEC is part of my wishes. The races are fantastic. There's also the new American championship that will be starting in 2014. We saw that the gap between a P2 and a DP isn't all that big at Daytona, even if we still need to see if that's the case at other tracks. It's nonetheless a positive sign."

Rebellion Racing may take on ALMS P1 title fight in 2013