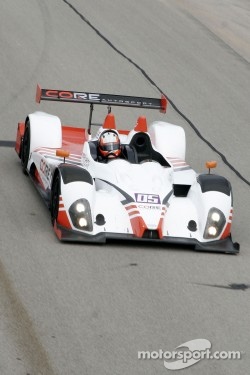 ROCK HILL, SC, Friday, February 10, 2012: After nearly 15 hours of testing over a two-day period, CORE autosport continues to prepare for the 60th Annual Mobil 1 12 Hours of Sebring powered by Fresh from Florida at Sebring International Raceway on March 17, the first event of the 2012 season.

At the official American Le Mans Series (ALMS) Winter Test at Sebring International Raceway the Rock Hill, SC-based team was able to gel despite many changes in the 2012 lineup.

The team debuted two new drivers alongside team owner / founder Jon Bennett in the Le Mans Prototype Challenge (LMPC) class #05 Composite Resources ORECA FLM09 - Colin Braun and David Martinez. For Braun, this session marked the first time in more than four years that he drove a race car without a roof, and for Martinez it marked a return to racing after some time off from the track.

The sister #06 Butterfield Farms / Lamex Foods / Hormel Bacon Bitsmachine was driven by IMSA Cooper Tires Prototype Lites series stars Antonio, Lucas and Matt Downs. The brothers are investigating taking the leap into ALMS competition from the Lites series – interesting because it was only one year ago that CORE autosport itself with founder Jon Bennett took that very same leap.

Debuting as well was a revised CORE autosport race engineering staff. New Lead Race Engineer Gary Davies was joined by Ed Nathman, who got his racing start with the storied Group 44 team owned by Bob Tullius and has an extensive resume with time in the top levels of sports car, open-wheel and NASCAR racing.

Times during the two-day test dropped steadily for the team, on day one the #05 set a fast lap time of 1:57.496 around the 17-turn 3.7-mile circuit, while on day two that number dropped to a 1:55.256. Team owner Bennett, Braun and Martinez were all able to spend long runs in the newly-liveried car and logged in solid performances worthy of a podium spot at the ALMS season kickoff next month.

Despite their relative inexperience with an LMPC car, the Downs brothers continued to become more comfortable in the notably larger and more powerful machine. The time chart reflected this sentiment, with a fast lap on day one of 2:00.092 and on day two of 1:57.364. Of note, all three brothers broke the two-minute mark, a good sign for race success.

Colin Braun
“I’d never driven a car with carbon brakes and it’s been a long time since I sat in a car with an open cockpit or seating on the right-hand side of the car. But the team as a whole – Gary Davies, Morgan Brady (team manager) and my co-drivers Jon and David – made me feel very comfortable.

“As each lap went by, I felt better driving the car. The most help I had was with long runs – to be able to play with the car for 20 laps or so really allowed me to adjust my style to fit with the car and the track.

“It’s all been a matter of working on the car a little bit at a time, making sure we’ve got a good grasp on Sebring and get ready for what’s going to be a great race next month.”

David Martinez
“The purpose of this test, especially for me, was to get some laps in the LMPC car, which I’d not driven before the test.

“I must say the car was quite good out of the box, which I would expect from the team that won the championship last year.

“The guys at CORE really did a great job making me feel at home in the cockpit and they made some good adjustments to the car. The overall atmosphere of the team works really well, which I think is the most important thing in a really long race.”

Antonio Downs
"I've driven an LMPC car before, but the first time I've driven this type of car at Sebring. The car has amazing horsepower - it feels like a big, live, huge race car, different than anything I've ever driven.

"At Sebring, there's plenty of room to really open it up. From where I've been, working to get to this level is a huge learning curve and I'm taking it step by step. I'm just working on gaining confidence and bringing down my times.

"This test was a great experience and I thank CORE autosport for hosting me and my brothers."

Jon Bennett
"It’s been really good to get back to the track for the team and personally it’s been great to be back in the car and knock the rust off. I also really enjoyed spending time with my teammate Colin, David and the Downs brothers.

“Every time we went out on track we learned something, and to just be out running as hard as we have makes for a good dress rehearsal for the main event next month. We should be pretty competitive.”

Morgan Brady, Team Manager
“Overall I think it was a really productive test. It gave us an opportunity to get back out on track, which was helpful because we haven’t done much off-season testing.

“In the #06 car, I think that the Downs brothers got a really good introduction to ALMS competition and we were impressed with their lap times. They are a great example of how IMSA and the ALMS have a ladder system that allows drivers like them to make the progression from the Prototype Lites series into entry-level LMPC class in the ALMS, something that we did as an organization last year.

“Our #05 car did very well for this test. It’s great to get started working with Colin Braun, who’ll be with us all year, and it was a pleasure to work with David Martinez again. They’re both very talented drivers who help the team get stronger through their input and performance.”

Lucas Downs
"I had a great time at the test. There were a few scary moments and I know I have to drive a lot faster, but it's been a lot of fun.

"I was a bit frustrated with my speed, but I'm happy we're all standing here with a clean car. I'm learning a lot in a short period of time."

Matt Downs
"I had only driven an LMPC car once before and the last time I was at Sebring in a Lites car, I wrecked into the Turn 17 wall. So I owed the track one.

"It's been great to get back out there in a powerful car and work on that corner - I don't know if I tamed it, but I may have made it my 'pet.'

"Overall the car felt really good, especially on day two. It was a great sign when the car feels that good even though I was a little off the pace.

"CORE autosport is a great, first-class organization. It's been a pleasure to work with people who really know what they're doing."