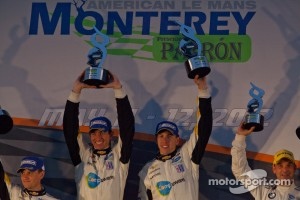 MONTEREY, Calif., May 12, 2012 – Corvette Racing broke its victory drought at Mazda Raceway Laguna Seca in convincing fashion today, sweeping the fiercely competitive GT class with a one-two finish in the six-hour American Le Mans Series Monterey. It was the team's first victory at the central California circuit since a win in the GT1 class in 2008, and its first one-two finish since moving to the GT class in 2009.

Oliver Gavin and Tommy Milner scored their second straight victory in the No. 4 Compuware Corvette C6.R by a 3.45-second margin over their teammates Jan Magnussen and Antonio Garcia in the sister No. 3 Compuware Corvette C6.R. The winning Corvette drivers completed 232 laps after rebounding from a troubled pit stop that dropped them to seventh place at the midpoint of the race.

Today's win was the 36th career ALMS victory for Gavin, and the second for Milner after the pair won one month ago in the streets of Long Beach. The victory vaulted Gavin and Milner into first place in the GT driver standings and gave Chevrolet the lead in the manufacturers championship after three of 10 rounds. Corvette Racing has now notched 83 class wins and 55 one-two finishes.

"We had a lot of ups and downs today, but ended up with a great result," Gavin said. "The Corvette C6.R car was spectacular and Corvette Racing did a brilliant job. We were all the way back to seventh at one point, so it took great pit stops and a fantastic setup to pull us back to first."

"It was just a crazy day, and winning feels really good," Milner said. "Our Corvette was phenomenal. We had one hiccup in pit lane, but this Corvette Racing team never gives up. We fought back and Oliver did an amazing job in his final stint. Just a great day for Corvette Racing!"

Gavin made the winning pass with one hour to go, taking the lead from Porsche driver Wolf Henzler. "I knew that he was strong and I needed to get it done and make it stick as soon as possible," Gavin reported. "I got just enough inside of him and he gave me just enough road. We had a bit of a rub in the last turn; Wolf's hard but fair."

Magnussen put on a show in the final hour, moving from fifth to second with a series of power plays. The Dane passed a Porsche and a BMW in a single move on the front straight to take second, but subsequently lost the position to the No. 55 BMW. With 15 minutes to go, Magnussen regained the runner-up spot by following a prototype through on the inside line in the Andretti Hairpin.

"I knew it was an opportunity for something to happen," Magnussen said. "The BMW got a little sideways, and I could see the P-car starting to pass on the inside. I was going to try to follow the P2, but he braked early and took all the air off my front end. I locked up the front brakes and kind of pushed him past the BMW."

Antonio Garcia drove the middle stint in the No. 3 Corvette C6.R, taking the lead shortly before the four-hour mark. "It was a very hard race, which is why GT racing in ALMS is the best in the world," Garcia said. "A six-hour race and in the end it comes down to hundredths of a second. I'm very happy for Corvette for its first one-two of the season. We were very solid all the way through, and we just need to keep digging. The next stop is Le Mans, and that is where we need to do another one-two!"

Today's victory at Laguna Seca marked a change of fortune for Corvette Racing, which has struggled at times to come to grips with the roller- coaster 2.238-mile, 11-turn circuit.

"Last year, Laguna was probably our toughest event," noted Engineering Director Doug Louth. "Our cars have changed a great deal from 2011, but the biggest difference this weekend was the 2012 Michelin tires and the work that engineers Chuck Houghton and Kyle Millay did to arrive at the baseline setup for this event. This is always a difficult track to keep a handle on through changing conditions, and any year that you have good cars every session and throughout the race is remarkable."

"We have a long month of June coming up, and Le Mans is a very different beast," Milner observed. "I'm looking forward to going back and driving down the Mulsanne Straight."