2012 Speed.com Sports Car driver of the year Ryan Dalziel has agreed to a dream deal to join factory-backed SRT Motorsports to tackle three of the biggest sportscar races in the world.

Proud Scot Ryan - who now lives in Windermere, Florida – will strap himself into the awesome SRT Viper GTS-R as part of the team’s assault on the 12 Hours of Sebring in Florida, the Le Mans 24 Hours in France and Petit Le Mans at Road Atlanta.

Sebring, Le Mans and Petit Le Mans are three of the toughest races in the world.

All six drivers will be participating in the ALMS open test session today at Sebring (Fla.) Int’l Raceway in preparation for the season opening 12 Hours of Sebring on March 16 at the 3.7-mile road course.

The SRT Viper GTS-R made its competition debut in 2012, at select American Le Mans races, but Ryan is confident of helping to take it to victory in 2013.

The SRT Viper GTS-R is built for three things - speed, reliability and durability. SRT partnered with Riley Technologies of Mooresville, N.C. to create the 2013 Viper GTS-R race car. Riley Motorsports, a subsidiary of Riley Technologies, will manage the racing program. The SRT VIPER GTS-R will run in the ALMS/ACO GT class against Ferrari, Porsche, BMW and Corvette among others.

Ryan is the first and only Scottish driver to hold all the major endurance race titles after his Rolex 24 at Daytona win in 2010 and class wins at 24 hours of Le Mans, 12 hours of Sebring and Petit Le Mans last year. Now he is determined to repeat the feat when the green flag waves this year.

RYAN SAYS: “I am really excited about this opportunity. It was something we started to discuss last year but the timing just didn’t work out with my 2012 commitments. 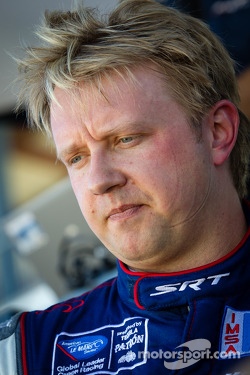 “But now the timing is perfect. I have to thank all the great people at SRT for making me feel at home in such a short time and for giving me this amazing opportunity to work for one of the coolest and most enthusiastic manufacturers in the world right now.

“Sebring, Le Mans and Petit Le Mans are three of the toughest races in the world. To go back to all three races after winning them all last year, in another competitive car, such as the SRT Viper is a dream come true for a driver, and I am going to do everything I can to help put the team on the top step of the podium.”

The detailed driver line-up for each of the two Viper GTS-R cars will be announced prior to the 12 Hours of Sebring.

RYAN ADDS: “To me, chemistry, relationships and personalities are the most important thing. I don’t think SRT Motorsports would have picked me if they didn’t think I was going to gel and vice- versa. For me, I didn’t need proof that the car was going to be fast; I know the car is going to be good. I just want to make sure that we all get along. To me, being involved in racing as long as I have, having good relationships and good chemistry is 90 percent of the battle. The other 10 percent, is a lot of the stuff that we can’t control.”

SRT MOTORSPORTS DIRECTOR OF MARKETING AND OPERATIONS – SRT BRAND AND MOTORSPORTS, CHRYSLER GROUP LLC, BETH PARETTA, SAYS: “Ryan Dalziel is an excellent addition to our SRT Motorsports team. He’s an accomplished racer and his intensity complements the enthusiasm of our team. Now, we turn our focus to final preparation of our Viper GTS-Rs for a full ALMS schedule and the 24 Hours of Le Mans.”

SRT MOTORSPORTS RACING MANAGER, GARY JOHNSON, SAYS: “We’re elated we had a chance to interview Ryan and provide insight about our approach to the racing program. We knew immediately that he was going to fit right in with the team. He compliments our driver’s racing savvy, their commitment to succeed. Ryan has been very successful on the track. I’ve had the opportunity to see him win in all the key races that we’ll be competing in this season. He’s the right piece of the puzzle we were seeking.”

While Ryan is determined to take his stunning 2012 form into the new season with the SRT Viper, he has not cut his ties with privateer’s Starworks Motorsport. The two teamed up to clinch the 2012 FIA World Endurance Team Championship title and the Fort Lauderdale team will be back in the fray in 2013. Ryan, 30, will add his considerable experience to the efforts of Venezuelan Alex Popow where there are no calendar clashes. He will also team up with Popow to mount a challenge for the Grand-Am Rolex Sportscar Series title, after scoring a hard-fought sixth place in the opening round at Daytona International Speedway in the #2 Riley Daytona Prototype.

RYAN SAYS: “Along with thanking SRT Motorsports for allowing me to continue my commitments with Starworks Motorsport, I have to thank Peter Baron and Alex Popow for allowing me to pursue this excellent opportunity to work for a manufacturer. Both Alex and Peter were part of this decision process and I appreciate their support more than they know.”

Butch Leitzinger joins Dyson Racing for the 12 Hours of Sebring