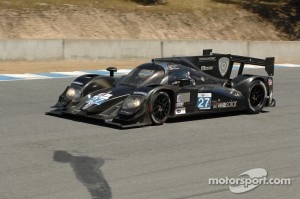 ATLANTA (May 17, 2012) – Dempsey Racing’s biggest weekend of racing competition to date in its 10 seasons of operation went into the record books this past weekend, May 11 – 13, as a foundation for the future that will see even further expansion for the Patrick Dempsey-owned professional motorsports organization based in Flowery Branch, Georgia.

The five-car and 12-driver effort, a milestone in what is also the biggest year of business operations for Dempsey Racing in 2012, was highlighted by the debut of the new ALMS P2-class No. 27 Trina Solar/GNC Beverages/Motegi Racing/Dempsey Racing Judd-powered Lola B12-80 Coupe in the American Le Mans Monterey Presented by Patrón at Mazda Raceway Laguna Seca. The Lola-Judd was driven by Dempsey, his co-driver and motorsports business partner Joe Foster, and young British driver Jonny Cocker.

At the same time all of ALMS action was taking place at Mazda Raceway, Dempsey Racing was in full force at the Global Barter 250 presented by Susan G. Komen for the Cure at New Jersey Motorsports Park with its pair of GRAND-AM Rolex Sports Car Series VISIT FLORIDA Mazda RX-8 GTs and its Miller Racing Mustang Boss 302R in the GRAND-AM Continental Tire Sports Car Challenge series. Tom Long and Scott Maxwell drove the No. 40 VISIT FLORIDA/Dempsey Racing Mazda RX-8 GT, usually driven by Dempsey and Foster, while Charles Espenlaub and Charlie Putman co-drove their No. 41 FishingCapital.com/Bass 2 Billfish/Dempsey Racing Mazda RX-8 GT. The No. 158 Miller Racing Mustang, which is prepared and entered by Dempsey Racing, is driven this season by Roger Miller and Ian James.

In addition to the five race cars and 12 drivers, the complete effort included a team of more than five dozen full-time and weekend engineering and crew members in operation simultaneously on both sides of the country. From green to checkered flag, the five entries and their drivers competed for a total of 20 racing hours, preceded by full days of practice and qualifying, and all five cars made it to the finish line in their respective races.

“I am so proud of the team,” Dempsey said. “The fact that we have 66 employees and we ran five cars over the weekend, three on the East coast and two on the West coast, is a remarkable feat in this day and age, in this economy, for a race team. To be able to realize that, and the hard work that Joe has put into it and everybody at Dempsey Racing, it’s a remarkable thing. And then when you have the time to step back, when you are not worried about picking up time and improving on the race track, it’s a remarkable achievement that makes you really proud of the team and all that we have been able to achieve. It’s hard to keep it in perspective, but it is pretty remarkable. We have come a long way since our fold-out table.”

Although this past weekend’s impressive feat will likely not be repeated this year, multiple weekend efforts for Dempsey Racing in the coming years – in North America and beyond – could become normal operating procedure. The ALMS P2 debut was the first event in a long-term program that includes a partial schedule of races this year, fulltime competition in future seasons and a return to the 24 Hours of Le Mans in 2013.

“It is kind of scary to think that just three or four years ago we had maybe three employees, one of which was me,” said Foster, who took a Saturday red-eye flight to New Jersey from California to support the VISIT FLORIDA program Sunday at NJMP. “Now we have about 34 full-timers and 60-plus this past weekend. It’s impressive and scary all at the same time!”

“We knew this weekend was coming, we were prepared for it, and had over 60 people working for us,” Foster said. “The results, as often happens in racing, definitely don’t necessarily show the effort that was put in and just how well things went, but from an operational perspective, as a business and as a race team, it was actually a very good weekend for Dempsey Racing. We have a lot of happy sponsors and part of doing this, and taking this step, was to prove to our partners that we are capable of running this type of expanded program.”

Dempsey continues to emphasize that both this past weekend’s ample effort and the entire 2012 racing season are about reaching the goals that were established when Dempsey Racing was introduced.

“This is a big step for our company and team that we have been working on very diligently with our partners, not only to race here at home, but also to get back to Le Mans and possibly more international events,” Dempsey said. “We set these goals when we introduced the company and never thought for a minute they wouldn’t be realized. It’s somewhat daunting yet incredibly gratifying at the same time, and the hard work will continue. It never really stops in racing, but it was nice to join Joe and everybody on the team for a collective sense of accomplishment before getting back to work.”