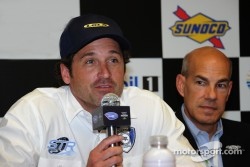 MONTEREY, Calif. (May 9, 2012) – Just over six weeks after announcing the team’s entry into the American Le Mans Series (ALMS) P2 division in a press conference at the season-opening 60th Annual Mobil 1 Twelve Hours of Sebring, Dempsey Racing principals and co-drivers Patrick Dempsey and Joe Foster confirmed today that the new program will make its race debut this weekend in the American Le Mans Monterey Presented by Patrón at Mazda Raceway Laguna Seca. Lead drivers Dempsey and Foster will be joined by Jonny Cocker in the No. 27 Trina Solar/GNC Beverages/Motegi Racing/Dempsey Racing Judd-powered Lola B12-80 Coupe.

The Mazda Raceway debut is the first event in a long-term program that includes a partial schedule of races this year, fulltime competition in future seasons and a return to the 24 Hours of Le Mans, possibly as soon as 2013.

Dempsey and Foster, along with frequent teammate Dane Cameron, put the new Michelin-shod Lola through a productive three-day shakedown test this past weekend at Miller Motorsports Park in Utah. Dempsey took his first laps in the new car on Friday.

“It is nothing short of an awe-inspiring experience in every respect,” said Dempsey, who will be racing a prototype sports car for the first time. “It feels familiar but so much more intense, the braking, the acceleration, cornering and power, it is all on a much more dynamic level than the GT cars I have driven. It’s an amazing machine and it is incredible to even have the opportunity to race in a car like this at this level, and what better track to start with than Mazda Raceway Laguna Seca. This race will really be a continuation of our learning and testing process only this time in front of a bigger crowd. We should be able to accomplish much more development and familiarization during an endurance race.”

Cocker brings winning experience in closed-cockpit prototype competition, particularly in Lolas, to Dempsey Racing as one of the top young talents in international sports car racing. The British driver is 20 years younger than his teammates but will fill a lead role in familiarizing Dempsey and Foster with the Lola-Judd, a package he has raced for two years.

“It’s an amazing feeling to be asked by Patrick and Joe to be involved with the new P2 program at this very early stage,” Cocker said. “The car is brand new, but fantastically developed by Lola, and the P2 Judd V8 is one of the best! It'll be great to meet all of the team. I think we’re all under no illusions as far as the work ahead but I think we have all the ingredients for a very successful weekend. It’s certainly a huge benefit having experience on our side for the team to speed up the learning process and take the maximum from the package that we have available to us. I’m confident that both Patrick and Joe will be in love with the car by the end of the race!”

Dempsey Racing’s move into the P2 division follows its full-season entry this year in the ALMS PC category in a partnership with Henri Richard, Duncan Ende and Silicon Tech Racing (STR). The Silicon Tech/Dempsey Racing No. 25 Future Electronics/HP/STANDD/Pounce Consulting/Racer’s Roast Oreca FLM09 is also competing at Mazda Raceway Laguna Seca with Ryan Lewis joining the driver lineup for the six-hour endurance race. Cameron co-drove with Richard and Ende at the Sebring opener also led his team to the PC victory in the 2011 running of the 12-hour race.

“Dane was a huge help in our initial test and we certainly want to work with him again both now and in the future,” Foster said. “Like Jonny, he is a generation younger than me and Patrick but not when it comes to prototype experience. We have and will learn a lot from both of these incredibly quick and talented young drivers.”

Foster and Dempsey are also highly appreciative of the around-the-clock efforts turned in by the Dempsey Racing crew the last few weeks. The team began the trip from Miller Motorsports Park to Mazda Raceway Laguna Seca on Tuesday.

“The shakedown at Miller was an important part of our preparation because we assembled and transported the Lola to Utah just a little over a week after receiving the car in our race shop in Georgia,” Foster said. “We were determined to make our debut at Mazda Raceway Laguna Seca as Mazda has been so supportive and incredibly cooperative in this venture. We owe everyone at Mazda, VISIT FLORIDA, Trina Solar, GNC Beverages, Motegi Racing, Specialized and Silicon Tech Racing a great deal of thanks for their patience and support. Hopefully we can pay them back with a great result on Saturday.”

With its entry into both P2 and PC in 2012, this season will be the biggest year of operation in the history of Dempsey Racing. This weekend alone represents Dempsey Racing’s biggest weekend of competition to date in the 10-year history of the company. In addition to the dual prototype efforts at Mazda Raceway, Dempsey Racing’s VISIT FLORIDA Mazda RX-8 GTs and its Miller Racing Mustang Boss 302R are competing in the GRAND-AM Road Racing event at New Jersey Motorsports Park in Millville, N.J. Familiar Dempsey Racing teammates Tom Long and Scott Maxwell will drive the No. 40 VISIT FLORIDA/Dempsey Racing Mazda RX-8 GT usually driven by Dempsey and Foster this weekend in New Jersey. The complete effort includes five race cars, 12 drivers and dozens of fulltime and weekend team, crew and engineering personnel in operation simultaneously on both sides of the country.

“This is about reaching goals that we established back when we introduced the team,” Dempsey said. “It’s both somewhat daunting yet incredibly gratifying at the same time. This is a big step for our company and team that we have been working hard on with our partners, not only to race here at home, but also to get back to Le Mans. It’s really a thrill and an honor to think about all of the fantastic venues we will be visiting the next few seasons, starting this weekend at Mazda Raceway Laguna Seca, next year back at Le Mans, and other top tracks like Sebring, Daytona, Indianapolis, Road Atlanta and so many others.”

Guy Cosmo primed for a GT win at Laguna Seca