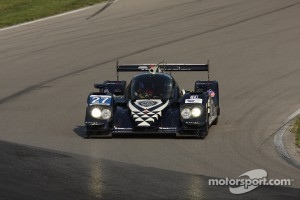 Foster qualified the No. 27 today at Road America, shaking off a sore right ankle and ribs after a hard hit less than a week ago when his Mazda RX-8 GT was knocked off course in a GRAND-AM Rolex Sports Car Series race last Saturday at Watkins Glen.

“I am sore but I will be just fine I think for the race,” Foster said. “My ribs are bugging me but we should be just fine. The main thing this weekend is to continue the learning process for 2013 in the P2 class. We brought Ben Devlin over from England to spell me in case there are issues and also to help lend wisdom on the Lola based on his extensive experience in the Dyson Lola. He’s been super helpful as we knew he would be, and we are glad that he is here.”

Foster drove the No. 27 in Friday afternoon qualifying and clocked in with a top time of 1:58.150 on the 4.048-mile Road America road course.

A top British sports car driving talent, Devlin could fill in for Foster if needed but will likely continue as a coach and advisor for the Dempsey Racing team Saturday as he has done so capably the last two days at Road America.

“I think we have got to be really pleased,” Devlin said after qualifying. “It is still a great big learning curve with the P2 car. You come to Road America, where the car suits its high speed, but it is so different. It is just building that confidence every time, and every time they have got in the car both guys have gone quicker. I think we have got to come away with that and be very happy to where we are. Yes, I believe there is still some on the table, we have got to be realistic, but every time we have gone out we have found time. I think Joe has to be happy with it, especially with the pain he is in, he is doing a great job.”

Road America is only the fourth race for the new Dempsey Racing P2 program that is using a partial 2012 season to prepare for next year’s ALMS championship. Team owner and lead driver Dempsey has been encouraged by the progress so far.

“I am very excited to be back at Road America, this track has so much history, it is a wonderful town and great support from the community,” said Dempsey, who co-drove with Foster in June’s GRAND-AM race at Road America. “It’s an incredibly challenging fast track; we had a really good opening practice on Thursday and learned a lot more today. We have a new motor this weekend, so it was really strong, it felt good, and we made some big gains over the first session.”

Dempsey has also been keeping a close eye on Foster, his co-driver and motorsports business partner, as he returns to the wheel just days after the hard hit at The Glen.

“Joe is like a grizzled old veteran,” Dempsey said. “He is going to get in the car and do his job and he has driven very well. I was really surprised, and just see how he felt physically, but he did really great, he knows what he is capable of doing and he is really inspired by being in this car. I think that helps him overcome what happened last weekend in many ways. He drove beautifully; we got him on some new tires and let him qualify.”

Dempsey has also seen the value in Devlin’s experience as a coach and potential co-driver this weekend.

“Ben has been really good, he has a lot of experience in these cars, which is really beneficial for us,” Dempsey said. “Once again, it’s another part of the training process for us to grow, he has been very helpful, been doing some coaching, and it just helps us a bit here and there. The more people we know that have been in these cars, the more knowledge they can impart on us, and Ben has been a huge help.”

Although it appears Devlin may not be needed behind the wheel of the No. 27 in Saturday’s race, he is content with the contribution he has made so far this weekend.

“You can’t expect to be more happy than this, the feeling I have inside to come back, one, to the ALMS and, two, to join the Dempsey Racing team, it’s a very exciting project, looks good, and I am over the moon,” Devlin said. “My goal is to try to get the best out of the guys and show them what I have learned over the last 12 years in sports car racing, especially 10 years with the Lola. If I can teach any little tricks to driving the car, it is very different to a GT car that they are used to, hopefully that is what I am going to do, that is my main role here this weekend, to push them and give them all the knowledge I can.”

Devlin clearly gets the development-oriented approach Dempsey Racing is taking with its maiden partial season in ALMS P2.

“I am just taking it step by step this weekend, let’s not look at the bigger picture, let’s just get this weekend out, see if we can get these guys on the podium and then we can go from there really,” Devlin said. “Let’s walk before we can run.”