The IndyCar/American Le Mans Series double-header weekend at Belle Isle in Detroit, Michigan, has been canceled for 2009. Late word today said that the event did not fit the business plans of race organizers amidst the current economic situation.

The IndyCar/American Le Mans Series double-header weekend at Belle Isle in Detroit, Michigan, has been canceled for 2009. Late word today said that the event did not fit the business plans of race organizers amidst the current economic situation. IndyCar and ALMS teams agreed that the race "relied too much on corporate support". 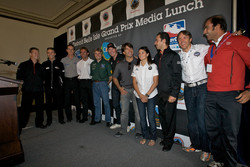 The cancellation leaves IndyCar a 17-race schedule, with three weeks after the race at Chicagoland Speedway, a Saturday night event on August 29, and before the oval at Motegi, Japan on September 19. ALMS now scales back to ten events, leaving the weekend following Mosport, Canada open, with nearly a month-long break before Petit Le Mans.

Roger Penske oversaw and was the driving force to bring the event back to the streets of Detroit, and he has had a busy off-season. Penske Racing shifted their sportscar efforts from ALMS to Grand-Am's Rolex Series, with Porsche power, leaving their RS Spyder in the LM P2 class in the history books. Now, the race he helped get back on the schedule after giving the track a sizeable facelift is off.

Penske told Autoweek, "This is a real economic time of distress for everyone and we couldn't sit here and count on a lot of things happening that we know weren't going to happen, especially knowing we live in such a distressed area with unemployment and all the other things going on."

Detroit returned to an open-wheel calendar in 2007 following a six-year hiatus, and consecutive years at the track have featured good crowds if not great racing. Justin Wilson won this year's edition for Newman/Haas/Lanigan Racing.

Detroit. more than any other city, is feeling the pinch of the global economic crisis. The "big three" U.S. automakers, GM, Ford, and Chrysler are verging on bankruptcy and hoping for a bailout to survive this month and into next year, while hundreds or thousands lose their jobs.

And not only that, but Detroit could be the tip of the iceberg in terms of street races falling by the wayside. The series is scheduled to open with consecutive runs in the concrete canyons of St. Petersburg and Long Beach but could their events be next?

Each signed contracts to continue to at least 2013 earlier this year. However, with construction costs through the roof for these circuits, permanent road courses appear a better proposition at the moment.

Before today, Detroit was one of five temporary courses on the schedule, along with St. Pete and Long Beach and the two Canadian rounds in Toronto and Edmonton.

Official announcements from IndyCar and the ALMS are likely to come tomorrow.