Drayson Racing's Jonny Cocker stole the LMP victory out of the hands of Klaus Graf in the penultimate corner at Road America today at the seventh round of the American Le Mans Series, in one of the greatest ALMS victories of recent ...

Drayson Racing's Jonny Cocker stole the LMP victory out of the hands of Klaus Graf in the penultimate corner at Road America today at the seventh round of the American Le Mans Series, in one of the greatest ALMS victories of recent memory. 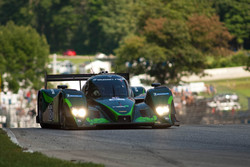 Cocker was on a tear, passing three cars in the final three laps to win the race, while Graf conserved fuel on a one-stop strategy. "I got lucky in traffic and then the chance was there so I took it," Cocker said at the post-race press conference. With the car sitting in pole position at the open grid before the race, he said, "We've got the car and I feel confident."

It would only depend on the variables of traffic and caution periods, though, he noted presciently.

As the green flag dropped, Cocker's teammate, Paul Drayson, slipped from pole to fifth place when Johnny Mowlem of Autocon Motorsports darted into the lead before turn one, leading Simon Pagenaud, Chris Dyson, and Timo Bernhard.

But in the penultimate stint, the Drayson Racing coup? stretched its legs while in the hands of the young Jonny Cocker, who simply ran away from the competition. His fastest lap was nearly two seconds quicker than any of his Le Mans Prototype class competitors.

With a thirty-second gap and twenty minutes remaining, Cocker brought the Judd-powered prototype in for a splash of fuel, sending him back to fourth and twenty seconds behind then-leader Klaus Graf in the lighter and less thirsty Porsche RS Spyder of Muscle Milk Team CytoSport. Cocker made up three seconds in his first lap out, and with fifteen minutes to go, he was only ten seconds adrift of the leader, albeit still in fourth place.

As the clock wound down, Cocker slipped back from third to fourth after running wide in the Carousel, but the first and second place prototypes had not pitted since lap 31. It was now lap 64.

With 5 minutes to go, Cocker had pulled back behind third-place Guy Smith, who was on the tail of Brabham, with Graf just 5 seconds ahead.

Cocker was able to power by Smith before turn 5, and tried to get past Brabham into turn one of the next lap, but again had to wait until the same corner where he had just passed Smith. Now, with less than three minutes remaining, Graf sat less than 6 seconds ahead of the young ace Cocker. Graf was fortuitously given the white flag, but Cocker refused to let up, and at the end of the back straight, Cocker twitched his Lola coup? behind the open-cockpit Porsche of Graf, who was held up by a GT car in the preceding kink.

In the second-to-last corner, Cocker darted to the inside of Graf and carried the momentum around the final turn and up the hill to the finish line, taking the win for Drayson Racing by 1.051 seconds. After the race, Graf said that he "did indeed run out of gas, with the engine misfiring on the way up the hill to the finish line". David Brabham held off Guy Smith to take third place for Highcroft Racing.

Meanwhile, the fastest GT car on the track, the Corvette of Oliver Gavin, sat in third place behind the Flying Lizard Porsche of Patrick Long, with a further gap to the BMW E92 M3 of Dirk Mueller. In the end, the BMW[pic] Rahal Letterman Racing's Mueller maintained his lead over Long, with Gavin rounding out the GT podium.

The race's first caution came on lap 7, when Duncan Ende's GT Challenge (GTC) car came to a stop at Canada corner. At the same time, John Field's Intersport Racing Lola prototype came into the pits and behind the wall, retiring with both exhausts smoking, disappointing since Field had stormed up from 31st to catch the other LMP cars.

Johnny Mowlem of Autocon Racing led the field across the line at the second restart, and Chris Dyson slipped by Simon Pagenaud for second place, but would relinquish the position a few laps later. In the last corner, Timo Bernard ran steadily in fourth overall, unable to challenge the front runners, but lurking a mere 5 seconds behind.

One lap after the restart, Risi Competizione's Jamie Melo snuck by both David Murray's Robertson Racing Ford GT and Olivier Beretta's GM Racing Corvette to take the lead in the GT class on lap 15. Melo started the race 7th in class, opting not to pit during the second caution period, bringing him into third place in class. By lap 20, Melo had built up an 11 second lead over the Corvette. Before the race, Melo mentioned coolly that Road America was not a Ferrari track, but that his Ferrari 430 GT felt good and was set up well. Although he struggled in qualifying with tires and said he was "missing something" around the track, he looked nothing other than in complete control of the GT class after the second caution.

At the end of the first hour, Johnny Mowlem lost power and coasted back to the pits as Highcroft's Simon Pagenaud and Chris Dyson sped past. Before the race, Highcroft's Michael Fitzgerald said with his car fifth on the grid, "It's just a matter of being consistent. Brabham and Pagenaud are such pros, we'll just wear everybody else down." For the time being, it appeared Pagenaud was doing just that.

The Frenchman's rhythm was interrupted, however, with the third yellow flag of the race, when the Jaguar of Ryan Dalziel stalled on the hill leading to turn 6. This erased the 25 second lead Jamie Melo had built over his nearest GT class competitor, now the Flying Lizard Porsche of Jorg Borgmeister, who handed off to Patrick Long on lap 30, sending Long out ahead of Melo's teammate Gianmaria Bruni.

A flurry of LMP pitstops handed the overall lead to Dyson Racing's Guy Smith, who took the wheel from Chris Dyson just before the caution. David Brabham took over from Simon Pagenaud, but a slow getaway put the Porsche RS Spyder of Klaus Graf into second place. Paul Drayson deferred to Jonny Cocker, who then set fastest lap before the yellow flags came out yet again. This time, a Porsche GT Challenge car left debris on the front straight after a collision with the pit wall. At the same time, Andrea Robertson was pushed off the track while passing a slower car and limped back to the pits with a broken suspension. The Dorian Design Ford GT would eventually rejoin the field to finish 11th in class.

With the front straight clear and less than an hour to go, the race restarted with Klaus Graf leading the field in the Muscle Milk Team Cytosport Porsche RS Spyder, while LMP Championship leader David Brabham sat in second, with fastest qualifier and fastest lap holder Jonny Cocker in third. In turn one, Cocker passed them both around the outside and began pulling away. He would eventually pit, fall to fourth place, and then storm to victory in the final three laps.

Luis Diaz, formerly of Fernandez Racing, led the LMP Challenge class in fifth overall, with Gunnar Jeanette in tow. In the GTC class, Jeroen Bleekemolen held a comfortable lead over Galen Bieker. Bleekemolen would take the victory for Black Swan Racing, attributing the win to quick pit work and tire changes that allowed them to pass in the pits rather than on track. Luis Diaz eventually ceded position to Gunnar Jeanette with 35 minutes to go, and would finish 21 seconds adrift of the Green Earth Team Gunnar Oreca prototype.

In the GT class, Dirk Mueller in the BMW Rahal Letterman M3 led Patrick Long's Porsche 911 GT3 RSR, and after one lap Team Risi's Gianmaria Bruni passed Jan Magnussen for third. Mueller held a small gap to the three-way battle for second, with Bruni hounding Long all the way around the 4.048 miles of Road America, with Jan Magnussen sniffing around behind. His teammate in the sister Corvette, Oliver Gavin, eventually passed Magnussen as Bruni fell back to 6th in class. Those positions held steady through the end of the race, with Mueller taking a hard earned victory that looked easier than it was. "Sometimes you have a really good feeling," said Mueller after the race. "When I was helping Joey [Hand] in the car before the race he was singing and that is a good sign. He got by third and second then he was leading. It's a team victory, and it's not only about here. We were leading every race this year, but couldn't find a way on the last lap. But we did today."

The LMP victors also cited their woes in the races leading up to Road America. "Well done to everybody in the team. Like I've been saying all weekend, we've been showing great pace in the last few races," said Jonny Cocker. "It didn't go our way at Mid-Ohio, but it did this weekend, and it's just an incredible feeling."

Cocker explained his last lap pass on Klaus Graf as "a bold move, but not a dangerous move...It was a fight from the stop. I made a small mistake behind David [Brabham] in the Carousel, and after that it was absolutely flat out. I was lucky with Klaus catching some traffic, but when I saw him in the distance on the last lap I didn't think I could do it. And the fact that I could is just a testament to the car."

The car also won the Michelin Green X Challenge, awarded each race to the team that is both the most energy efficient and the most competitive. Cocker's teammate and team owner Paul Drayson said after the race, "We're a young team and we've had a lot to learn, but today it's such a sweet feeling to win our first American Le Mans Series race, it's just an incredible feeling...The whole point of this is showing that the new technology will win."