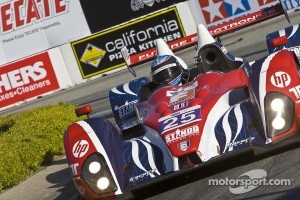 May 7, 2012 (Los Angeles, Calif.) - After standing on the top step of the podium at Mazda Raceway Laguna Seca last season, Duncan Ende is headed back and looking for a repeat performance this weekend.

After a troublesome start to the season at the 60th Mobil 1 12 Hours of Sebring, Ende and co-driver Henri Richard were simply looking to finish at the series' second round at the Long Beach Grand Prix - which they did, bringing the no. 25 Dempsey / Silicon Tech Racing Oreca home in fifth place in the Prototype Challenge class. The race wasn't smooth-sailing for the team, but after scoring their first finish of the year, Ende says the team has a podium result in its sights at this weekend's six-hour contest at Mazda Raceway Laguna Seca.

"We are still learning something about our PC car each time we drive it," said Ende, who recently took part in a Dempsey Racing team test at Miller Motorsports Park in Utah. "We were very happy with our race pace at Sebring, and now we've gotten a handle on what the car needs in a sprint race. But, I think we have a good handle on the endurance races and I always enjoy driving at Mazda Raceway Laguna Seca, so I am really looking forward to this weekend."

Joining Ende and Richard for this weekend's race will be Ryan Lewis. Lewis and Ende worked together earlier in the year in the initial tests for the Dempsey / Silicon Tech Racing program.

"When we first got the car, Ryan really helped us to get it going in the right direction," said Ende. "On the technical side he's a big help, and anyone who has raced against him knows that he won't quit - he just keeps digging and digging and digging. He also has a sense of humor that I'll describe as 'unique' but he fits in great with the team."

Ende will also get some extra track time as he will take part in a bike ride on the hilly 2.2-mile circuit on Wednesday afternoon.

"If you think the Corkscrew is impressive in a car, try it on a bicycle," said Ende. "What's even more impressive than plummeting downhill through turns nine and ten is climbing uphill from turn six to the Corkscrew!"